Combined heat and power (CHP) plants are an efficient way to generate electricity if a use for the surplus heat can be found. Conventional electricity power stations discard waste heat in their cooling towers, meaning around 70% of the energy used to produce electricity is wasted. CHP plants capture this heat for supply to homes, businesses and industry. In its simplest form, the CHP plant employs a gas turbine, an engine or a steam turbine to drive an alternator, resulting in electricity. Although most UK plants are powered by natural gas, an increasing number use liquid, solid or gas by-products, waste products or biomass fuels such as straw bales or waste wood pellets. A small CHP plant is typically 2 MWe and a large station 30 MWe.

Co-firing of biomass with coal in large-scale coal fired electricity generation plants has been encouraged in the UK.

Gasification of biomass can be carried out to produce pipeline quality biomethane.

Anaerobic digestion is a microbiological process that converts high moisture content organic wastes such as animal manure, food processing residues and sewage sludge into a methane rich biogas – typically around 65% methane and 35% carbon dioxide. The methane can be used as a fuel for electric generation. Anaerobic digestion is the method by which landfill gas is generated.

Biofuels
Liquid biofuels can be used to power transport vehicles. The two most common biofuels used in the UK are bioethanol, which can be blended into petrol, and biodiesel, which can be blended into diesel. Biodiesel can be made from oily plants, animal fat, or used vegetable oil. Bioethanol is petrol quality liquid fuel consisting of ethanol produced from biomass. Unlike petrol and diesel, biofuels contain oxygen so adding biofuels to petroleum products allows the fuel to combust more completely. When burnt it produces fewer emissions than petroleum-based diesel and can be used in existing diesel engines without any modifications.

Ethanol (a type of alcohol) is produced from sugar-rich crops such as corn and sugar beet. The sugar is extracted from the plants and allowed to ferment, producing ethanol. Ethanol is used widely in Brazil where it is mixed with petrol – 80-90% petrol and 10-20% ethanol. Such mixes are also often used in the USA, especially in cities that suffer from air pollution such as Los Angeles. The presence of just a small amount of ethanol makes the fuel burn more cleanly.

By using renewable energy fuels for 10% of our transport fuel mix the UK could reduce oil consumption by 2.5 million tonnes of oil equivalent (3% of our oil demand) by 2020. This would help reduce the need to import oil, reduce the impact of crude oil supply disruptions and alleviate the impact on petrol and diesel retail price of spikes in the price of crude oil and petroleum products. However, there are increasing concerns over the potential for heavily subsidised biofuels to displace existing food crops, leading to an increase in food prices worldwide. While biofuels can make a substantial contribution to our transport fuel needs, in the short-to-medium term they are likely to be part of the solution rather than the whole answer.
Heating
Over 80% of the fuel delivered to public buildings is used for heating, so heating represents a significant opportunity for savings in greenhouse gases. Biomass heating systems can be used for heating of buildings, hot water production, steam production, or any combination of these. They can be used at almost any scale, from domestic (c.10kWth) through to ‘light’ commercial (c.50kWth to several MWth), to industrial or district heating systems (up to hundreds of MWth). Fuels used in biomass heating systems include wood chips, pellets and logs. Wood chips or pellets made from waste wood are currently used to provide hot water and heating in a range of public and private sector buildings such as schools and offices. District heating, where a single boiler installation is used to provide heat to a number of buildings, is common in some European countries and has been used in a number of UK residential projects. There are two main ways to use wood for heating: a standalone wood stove burning logs or pellets to heat a single room or a boiler burning pellets, logs or chips connected to a central heating and hot water system.
Standalone stoves
Costs for a domestic standalone pellet stove are around £4,300 including installation, while a standalone log stove will usually cost less than half that amount. (Energy Saving Trust, 2011).
Boilers
Biomass boilers tend to be physically larger and more expensive compared to gas or oil fired boilers. Additional costs can arise from the civil engineering works associated with the construction of silos and much larger boilerhouses, and the boilers and fuel feed systems themselves are considerably more expensive. The requirement for a buffer vessel also adds cost. Typically, a complete biomass boiler system will cost up to ten times that of a gas or oil fired boiler system (Biomass Energy Centre FAQs, v1.0). A small automatically fed pellet boiler for an average home costs around £11,500 including installation (Energy Saving Trust, 2011) while the Carbon Trust estimate a typical figure of £200,000 for an industrial biomass heating system (Carbon Trust, Biomass heating: A practical guide for potential users, 2009). Woodchip
fired heating systems of less than 500kW cost between £180-250 per output kW, but for systems over 500kW, capital costs fall to £150-230 per kW.

Biomass boilers are usually serviced annually by the company which installed them; service costs depend on the parts required and the plant type and are likely to have a labour cost in the range of £400-£1,000/year for plants larger than 1 MWth. The price of woodchips usually varies from 1.0 – 1.8 p per kWh, costing from £25-£45 per tonne depending on the moisture content, the source of the wood and the distance it has to travel. The much greater capital cost of biomass systems means that the payback period will, inevitably, be longer than for a fossil fuelled boiler system. Set against the greater capital cost is the usually lower price of biomass fuels. The majority of biomass systems to date have been installed in areas where mains gas is not available and where, in comparison to the price of fuel oils, biomass fuels are relatively cheap. Taking into account these two factors a typical payback period for a biomass boiler is about 8 years, but this figure can vary considerably. If fuel oil prices continue to increase steadily over the coming years, payback periods will fall as wood prices are not anticipated to increase at the same rate as fossil fuel prices. Finally, where grants or other incentives are available a typical payback period is about 5 years. (Biomass Energy Centre FAQs, v1.0).

The Renewable Heat Incentive was set up by the UK Government in 2014 to offer householders and businesses financial incentives in return for implementing eligible renewable heat technologies. It is the first scheme of its kind in the world with hopes that the scheme will contribute towards the 202 target of 12% of heating coming from renewables. Biomass (wood fuelled) boilers and biomass pellet stoves with integrated boilers providing space heating qualify for the renewable heat incentive scheme.

Historical information on biomass can be found here.

Electricity generation from biofuels and waste increased from 122.7 TWh in 1990 to 358.0 TWh in 2017.  Electricity generation from solid biofuels has a 2.5% annual growth rate and biogases a 12.2% annual growth rate between 1990 and 2017. Solid biofuels are the fourth largest form of renewable energy after hydropower, wind and solar PV. In 2017 the largest producer of electricity from biofuels and waste was the US which produced 78.4 TWh; followed by Germany with 58.7 TWh and then Japan with 34.2 TWh. The graph below shows that OECD Europe contributes the highest amount of electricity production from biofuels and waste to the OECD total and the Middle East contributes the least. It should be noted that some of the figures are estimates because some countries do not separate renewable and non-renewable municipal waste. 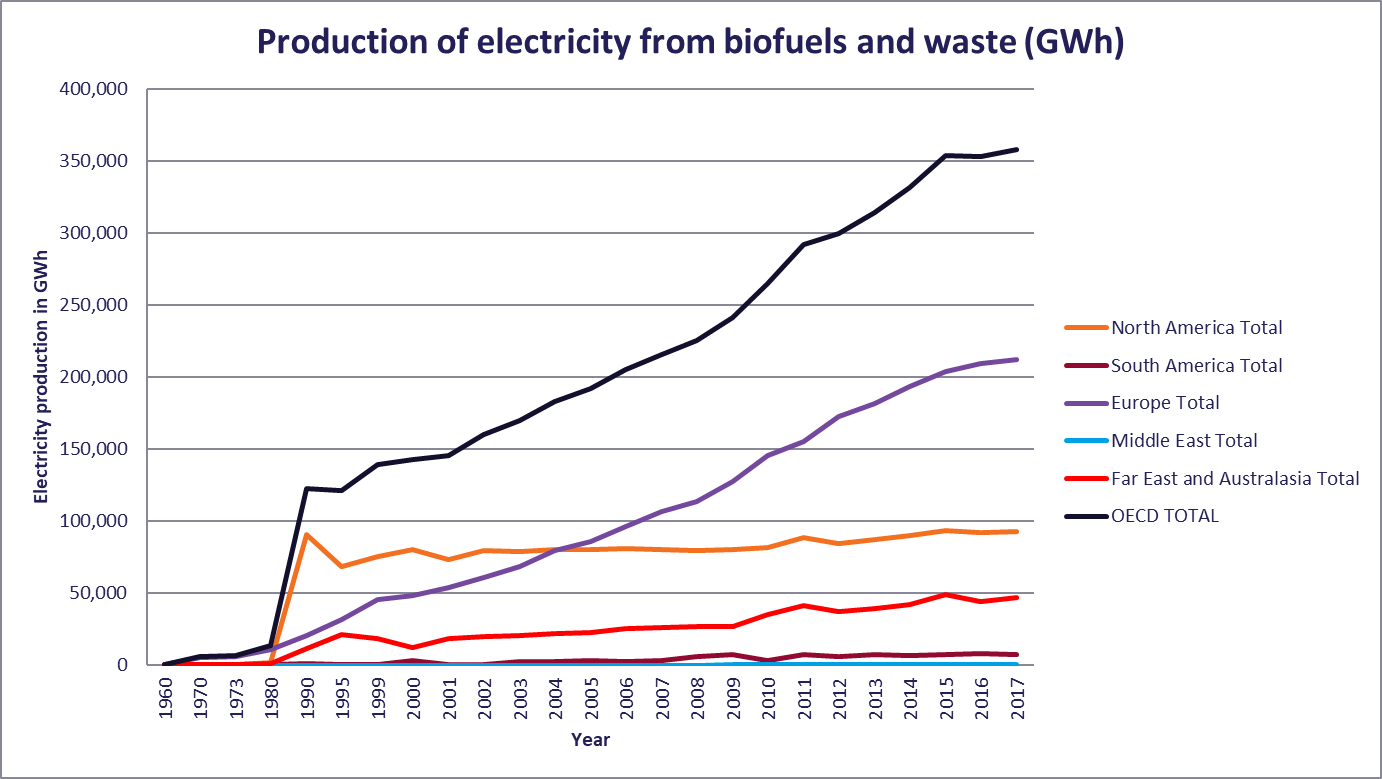