In this Energy Insight:
o What are cement and concrete, and how are they produced?
o What are the energy and environmental impacts?
o What options do we have for decarbonising cement production?

What is concrete? Is it the same as cement?

Concrete is one of the most common building materials in the world, known for its strength, versatility, and fire resistance. It is made up of a hard particulate substance called aggregate (usually comprised of sand and gravel), bound together with cement and water. Concrete is a vital tool for the construction industry, used for roads, bridges, railways and buildings of all different types. It is particularly important for developing countries which are working to expand and improve critical infrastructure. Using concrete can have strong positive public health improvements; for example, replacing mud floors in dwellings with concrete floors can reduce the transmission of parasitic diseases by around 80%.
Cement and concrete are not the same thing. Cement is one of the components of concrete, but the term is sometimes used colloquially to mean concrete. Hydraulic cements (which harden when water is added) are made up of a mix of silicates and oxides found in limestone, clay and other minerals.
Concrete has been used in construction for thousands of years - a precursor of concrete was invented in the Middle East in about 1300BC. The Ancient Egyptians building their pyramids in about 2600 BCE, and the Chinese building  the Great Wall of China at about the same time, each used a form of mortar in their construction. The Pantheon and Colosseum of Rome, bath houses and harbours, built by the Romans, from third century BCE to 5th century CE, used concrete and thus demonstrated, to later civilizations, concrete’s durability. It is thought these structures have lasted so long because their concrete incorporated volcanic ash. 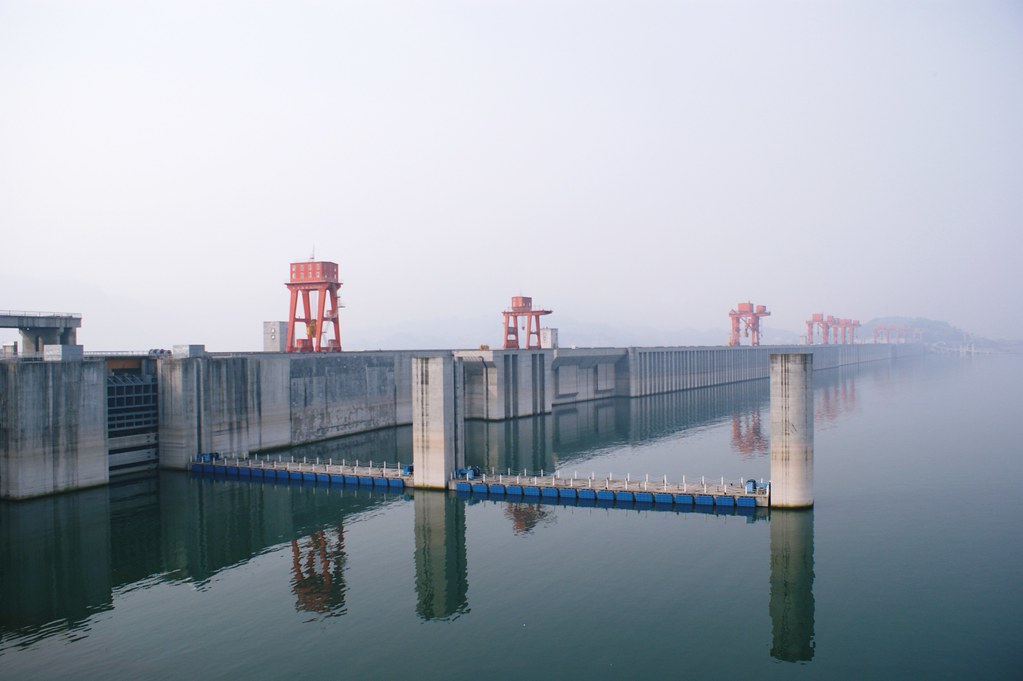 The Three Gorges Dam in China is the largest concrete structure in the world. Image © Hugh Llewelyn under Creative Commons license

How are cement and concrete manufactured?

The manufacture of concrete is a complex process, that involves both thermal and chemical reactions. It is estimated that 3000-6500MJ of energy is needed to make one tonne of cement clinker. The process starts with the production of cement:
1. Raw materials (limestone, clay etc) are quarried, crushed and heated in a kiln to around 1500°C. 1.57 tonnes of raw materials are needed to produce 1 tonne of cement clinker. This is the most energy-intensive part of the process.
2. An intermediate called clinker is produced, containing silicon, iron and aluminium oxides. It is cooled and mixed with gypsum. Portland cement, the most common variety in general use, is made by grinding the clinker with sulphates to achieve desired setting properties.
3. Cement powder is mixed with water to form a paste, and then mixed with sand and gravel to form concrete slurry
4. Concrete slurry is poured into a mould and sets to become concrete - the finished product

How much cement is produced each year?

According to the USGS, total cement production in 2020 was approximately 4.1 billion tonnes.
Imperial College estimates that 3.5 billion tonnes of this is Portland Cement, and that the process emits up to 622kg of Carbon Dioxide (CO2) per tonne of cement. China dominates the cement sector, with the country responsible for over half of global production in 2020. 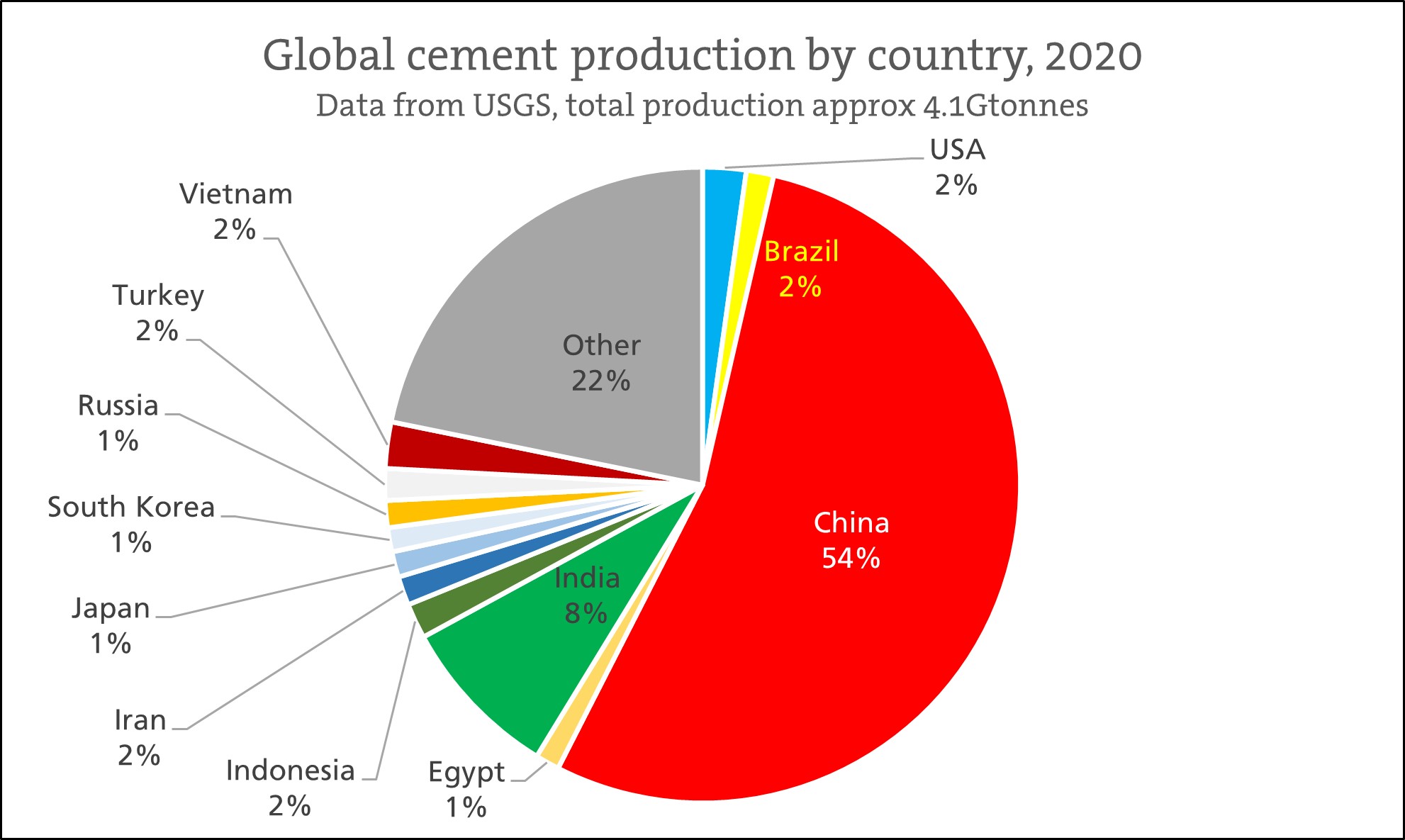 Environmental effects of cement and concrete

The European Environment Agency monitors the pollution emanating from cement production. As with many industrial processes, process emissions arise at all stages of production, from quarrying of raw materials, handling, bagging, and so on. However, most emissions come primarily from combustion of the fuels used during pyro-processing and emanate from the kiln system.
Chemical reactions during the process are responsible for the production of harmful NOx, SO2, dust and volatile organic compounds. Dust from cement can contribute to air pollution, and the corresponding negative health impacts that come with it. Concrete production is responsible for around 2.8bn tonnes of CO2 per year, which is between 4-8% of total human-made emissions. Imperial College estimates emissions from the cement industry at 2.2bn tonnes CO2 per year.
Environmental issues with using lots of concrete include the heat-island effect (concrete traps heat and disproportionately warms urban areas), and high water usage needed for production. Placing concrete over soil or grass reduces the amount of fertile land available, threatens biodiversity and increases the risk of flooding. Additionally, quarrying limestone and acquiring sand as raw materials increasing environmental destruction.

There are a number of different steps that can be taken to reduce emissions from cement production. Companies such as Calix, Novacem and Fortera are working on developing low-carbon cements for commercial use.

• Promoting material efficiency (reduce clinker-to-cement ratio and total demand). This includes intelligent design decisions for buildings and infrastructure - shape and size can have a big impact on the amount of concrete needed.
• Improving energy efficiency of the production process.
• Ensuring cement kilns are maintained at maximum potential operation. Retrofits can be expensive, but being more efficient saves fuel

Switching to a renewable energy source for heating

• Currently, highly-polluting coal or coke are most commonly used to heat up cement kilns. Switching to a lower-carbon fuel (natural gas, biomass etc.) reduces emissions.
• Other alternative fuels include waste oils, solid waste and old tyres
• Additionally, introducing a carbon price could discourage the use of coal and coke

Clinker is the main component of cement (the remainder is usually gypsum) - for ordinary Portland cement, it can be as high as 95% of the total. However, other materials can be mixed in as a substitute for some of the clinker, reducing the clinker to cement ratio. Reducing the clinker content of cement reduces the amount of energy needed for the process.
The table below shows some of the options for clinker substitutes - each has pros and cons, and the availability of materials is often an issue.
Source: Global cement and concrete association https://gccassociation.org/cement-and-concrete-innovation/clinker-substitutes/ & ECRA Technology Papers (2009)

CCUS technology could be used to capture greenhouse gas emissions from fuel combustion and limestone calcination (in the kiln).
Post-combustion technologies capture CO2 after the clinker production process is complete. This could be achieved using chemical absorption, or membrane technologies.
Another suggestion is oxyfuel technology - by using pure oxygen instead of air in the kiln, a much purer CO2 stream is produced, for easier capture and storage.
CCUS technology is not yet widespread and has generally been deployed in small-scale pilot projects. It has the potential to dramatically reduce emissions, but it needs to be efficient, affordable, and simple to install. It is likely that government intervention will be required in the short- to medium-term in order to make sure CCUS is a viable economic option for cement manufacturers.
To learn more about CCUS, see the following Energy Insight.

In their paper for Joule, Fennell, Davis and Mohammed envisage decarbonising cement production through a combination of the measures described above, namely: improving process and energy efficiency, deploying CCUS, and burning biomass and waste to heat the cement kiln.
Given the importance of concrete and the volume of production, more efforts are needed to reduce the emissions intensity of the production process. The IEA is recommending a 0.8% decline in CO2 emissions per year to stay on track with its sustainable development scenario.
In summary, in order to speed the decarbonisation of concrete and cement production, governments and industry should work on the following points:
• Promote the adoption of more efficient kiln technology, and encourage alternative fuel use for heating the kiln
• Encourage clinker substitution where appropriate
• Facilitate CCUS development
• Introduce a  stable policy framework for pricing CO2 emissions
• Increase R&D into low-carbon cement production
• Encourage international collaboration
---
This Energy Insight is part of a series about energy and industrial processes:
o Petrochemicals
o Cement and concrete
o Iron and steel (coming soon)