Continuing price rises by energy companies have led to concern about excessive levels of profitability for these companies and a debate about lack of competition in the UK energy market, culminating in the proposition of energy price caps by Labour and the Conservatives in the 2017 general election and more recently as part of the BEIS Clean Growth Strategy. While the information sheet “UK energy prices and profits” explores the development of prices in more detail, this information sheet examines the structure of the UK retail market and the policy debate on affordability of energy.

1          Structure of the UK energy retail market: Customers lose money by not switching tariffs or suppliers

The big 6 energy providers have a market share of 81% of the domestic gas market and 83% of the domestic electricity market. The majority of customers of the big 6 energy companies are on standard variable tariffs (SVT), ranging from 50% (at Scottish Power) to 91% (at SSE), about 70% on average. The proportion of all non-prepayment customers (not just those of the big 6) on SVTs is 59% on average (as of April 2017, data updated biannually).

The difference between the average SVT annual bill by the big 6 and a bill based on the cheapest tariff in the market was £300 in June 2017. The CMA concluded that in 2015, domestic energy customers as a whole paid £2bn more than they would have in a competitive retail market. The detriment suffered by customers on prepayment contracts equated 12% of a typical bill, compared to 8% for customers paying by direct debit and 7% for customers paying by standard credit.

The number of customer switches between suppliers increased from 2003 until 2008 but declined significantly in the following years until 2012 and levelled out (Figure 1). It has been on the rise since 2014. Energy UK reported that in August 2017, nearly half a million customers switched their energy supplier, 30% more than in August 2016. The number of switches from January untill August 2017 were almost 3.5 million, higher than the total number of switches in 2014. Switches to small and medium suppliers have been increasing since 2010 and so has their market share (cp. Figure 2 for gas and Figure 3 for electricity). 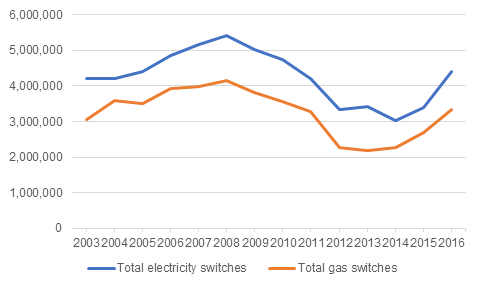 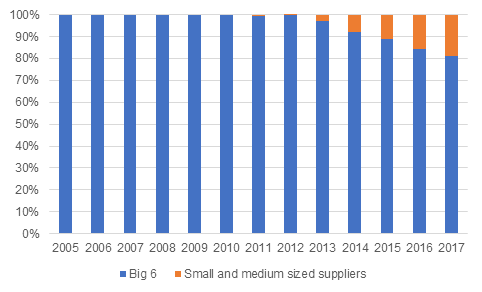 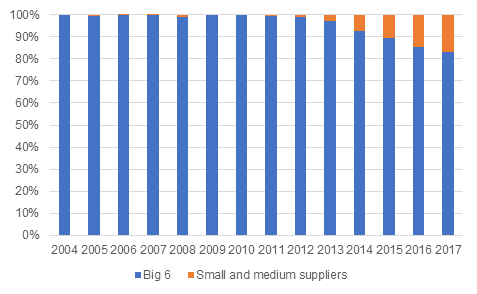 Amid continuing price and bill rises from 2004 to 2014 (compare EI Energy Insight “UK energy prices and profits”), and growing concerns about market power  and lack of competition, the regulator Ofgem referred the energy market to the CMA for a 2 year investigation. While the CMA concluded in its final report in 2016 that there is sufficient competition and large companies are not able to exploit market power in wholesale markets, it identified a lack of consumer engagement as a main reason for reduced competition in retail markets. Large energy providers inherited their customers from the state during the liberalisation in the 1990s and the majority of consumers don’t switch suppliers or even tariffs (while staying with their supplier).

The CMA identified significant obstacles for particular customer groups, especially customers on prepayment contracts, which include poorer households, to engage in the market and thus benefit from competition. However it concluded there were no major barriers for the majority of domestic consumers to switch suppliers and tariffs and pointed to complexity of bills, lack of comparability of tariffs and a perception of energy being taken for granted as possible explanations. It could not identify any advantage of SVTs over most cheaper tariffs.

In a survey conducted among EI members shortly before the 2017 UK general election, 53% of respondents opposed the introduction of energy price caps. While they expected such a price cap to benefit affordability of energy, they saw such benefits counterbalanced by detrimental impacts on investment, decarbonisation and competition.

In the same survey, making energy efficiency an infrastructure priority was identified as by far the most important issue for the Government’s energy policy agenda. Apart from reducing emissions and dependency on imports, energy efficiency improvements benefit affordability. The Committee on Climate Change has estimated that households have saved £490 per year since 2004 due to reduced energy usage because of more efficient lighting, appliances, heating and insulation. Many of these improvements have been driven by public policy. Research by UKERC suggested that further efficiency improvements could reduce consumer bills by another £270 based on current prices. It is also argued that such measures can bring down bills permanently, while price caps remain reliant on policy support.

The CMA deems third party intermediaries (TPIs) such as price comparison websites (PCWs) important to enable customer engagement and effective competition in retail markets and has thus proposed reforms to strengthen their role and effectiveness.

Ofgem accredits PCWs which operate according to its Confidence Code, a code of practice which aims to ensure the options offered on the websites are reliable and prices are calculated in a fair and accurate way. Accredited websites are listed on Ofgem’s webpage.

Price comparison websites are themselves the subject of a review by the CMA into their benefits and the transparency of their business models to customers. The report of this investigation is expected by the end of 2017.

In 2015, Ofgem has launched its Switching Programme to transform current switching arrangements and deliver faster and more reliable switching for consumers. The programme will continue until at least 2019. A consultation on next-day switching was opened in September 2017.

Sep. 2013: Ed Miliband, leader of the Labour party at this time, promises to freeze energy prices temporarily and “reset the energy market”.

Jun. 2014: Ofgem refers the energy market to the CMA for a 2 year investigation to address concerns about market power of big companies and lack of competition and transparency.

Jun. 2016: CMA publishes its final report on its investigation. Among the policy measures demanded are more regulating competencies for Ofgem, a price cap for customers on prepayment contracts and improved information and transparency to increase customer engagement and switching in retail markets. While the CMA had been debating a price cap for all customers on SVTs, they advise against it due to its expected negative impacts on competition and customer engagement.

Feb. 2017: Ofgem announces the introduction of a price cap for consumers who prepay both electricity and gas, affecting more than 4m households. The cap is supposed to stay in place only until all UK households are provided with smart meters, which should be accomplished in 2020. The cap levels will be updated on 1 April and 1 October each year. In August, Ofgem states that the cap will be lowered for the next period. The change, which takes effect on 1 October, is set to cut the average annual bill for dual fuel pre-payment customers to £1,048 from £1,067.

May 2017: The Tories’ manifesto for the general election announces an extension of the introduced price cap to “more consumers on the poorest value tariffs”. Theresa May, UK Prime Minister, had said in March that “the market is not working as it should”. Labour declares it will introduce “an immediate emergency price cap to ensure that the average dual fuel household energy bill remains below £1,000 per year, while we transition to a fairer system for bill payers”.

Jun 2017: Energy price caps are absent from the new Government’s Queen’s speech. Instead, BEIS secretary Gregg Clarke sends a letter to Ofgem after the election to ask, what measures the regulator intended to take to protect households on the poorest value energy tariffs.

Aug 2017: The Government announces an independent review of energy costs by academic Dieter Helm. Such a review was envisaged in the Industrial Strategy green paper in January and supported by the Government’s ambition, as stated in the Tory manifesto, to have the “lowest energy costs in Europe, both for households and business”. 50 Conservative MPs, including 20 former ministers, and 38 Labour and SNP MPs sign a letter calling on Theresa May to introduce a price cap on SVTs.

Aug 2017: Ofgem declares that legislation would be the most effective way to introduce a price cap for all costumers on SVT contracts. It stated that parliament rather than an unelected regulator would be the appropriate authority to introduce such far reaching changes. However it is considering to extend the existing price cap for customers on prepayment tariffs to a further 2.6m vulnerable consumers, who receive the warm home discount.

Sep 2017: EON announces it will abandon standard variable tariffs for all consumers who have a smart meter (currently 16% of their customers). 192 MPs including 76 Conservatives sign a letter urging the Government to honour the pledge to cap energy prices.

6 Nov 2018: Ofgem published their decision to introduce the cap