Since this Energy Insight was first published in 2017, the UK government has implemented price caps on standard variable tariffs for the supply of both gas and electricity to domestic customers.
The Domestic Gas and Electricity (Tariff Cap) Act 2018 came into force on 19 July 2018. Ofgem was required by the Act to “modify the standard licence conditions for gas and electricity suppliers, so as to include conditions ("tariff cap conditions") that impose a cap on the rates that may be charged for certain tariffs offered to domestic customers . . . as soon as practicable after the Act is passed”.
After a consultation peroiod, on 6 November 2018 Ofgem published their decision to introduce the cap, and a default tariff cap came into force on 1 January 2019.
In future, the cap will be reviewed every 6 months, and will cover the 6 month period commencing 1 April each year (announced no later than the 5th working day in February) and that commencing 1 October (to be announced on the 5th working day of August.

What has the tariff cap been set at?

The tariff sets the maximum price, not the maximum bill, and is “based on a duel fuel single rate customer paying by direct debit using a typical amount of energy in annualised terms”. The amount of the bill depends on how much energy is used, method of payment, and where the customer lives. There are detailed tables available for the the maximum tariffs for gas and electricity in different locations in the UK

See Ofgem's website for more information on how the price cap is set and the  Default tariff cap level: 1 October 2021 to 31 March 2022 for all regions of the UK.

Vulnerable customers
From February 2019 customers in receipt of the Warm Home Discount  are also protected by the new default tariff cap.

Whose fees are not capped?

Fixed-term energy tariff customers are not protected by the tariff cap – but, although tied into a contract for a set period of time, generally pay a lower tariff than variable tariff customers.

Energy price caps for dual fuel bills (gas and electricity) were a prominent topic of the 2017 UK general election and continue to be debated. This information sheet focuses on what’s at the heart of this debate: the development of energy prices in the UK. The EI Energy Insight “Rigged or competitive? UK retail energy” focuses on the structure of the UK retail market and policy proposals to ensure affordability of energy.

We explore three indicators for energy costs of households: prices, annual bills and share of household expenditure spent on energy.

While decreasing in the late 1990s and early 2000s, UK domestic electricity and gas prices have almost steadily been increasing in real terms (i.e. taking account of inflation) between 2003 and 2014 but have decreased slightly in the last 2 years. Gas and electricity prices movements are broadly in line (Figure 1). 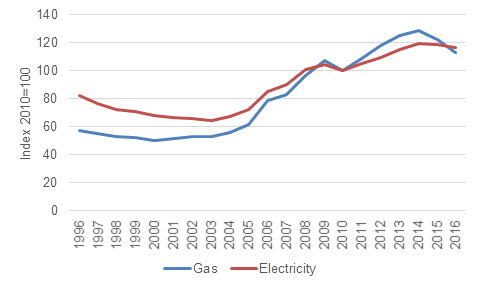 This moderate change (in real terms) is in part due to a decrease in 2015 and 2016 of both gas and electricity prices after increasing between 2010 and 2014. Furthermore both have increased significantly between 2000 and 2010: Gas prices were 99% higher in 2010 than in 2000, electricity prices 47%. In comparison, prices of motor oils and fuel increased by 18% over the same period (all changes in real terms).

All of the big six energy companies have increased prices in 2017 for their standard variable tariffs (SVTs, see below). These increases, mainly driven by electricity price rises, will lead on average to an increase of 8.0% of an average dual fuel bill for an SVT customer of the big six (cash terms, cp. Figure 2). 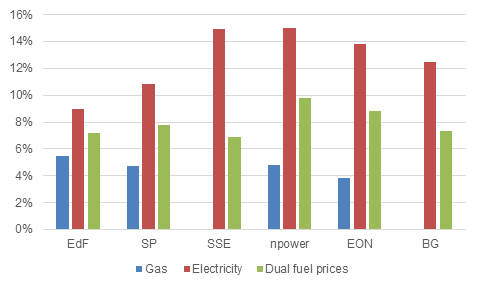 The indices above are based on the developments of prices, i.e. tariffs offered by energy suppliers. The developments of dual fuel bills based on a fixed consumption level of 3800kWh/year of electricity and 15000kWh/year of gas are in line with these price developments. In real terms they have been increasing rather continuously from 2005 to 2014 while decreasing in 2015 and 2016 due to lower gas prices. The gas share of the bill has increased from 46% in 2000 to 53% in 2016. 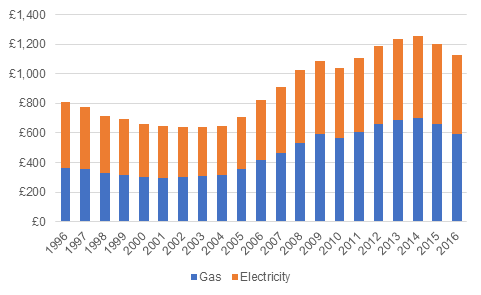 Similarly, Ofgem’s estimates for average bills, which factor in fluctuating consumption, suggest that in 2014-2016, bills have been reduced by an average of 4% in cash terms, compared to the previous year. 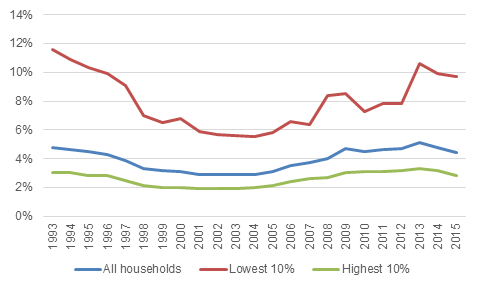 An average of 3.7% of household expenditure was spent on petrol, Diesel and other motor oils, compared to 4.4.% for gas and electricity in 2015. 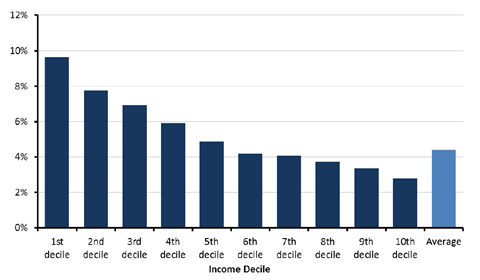 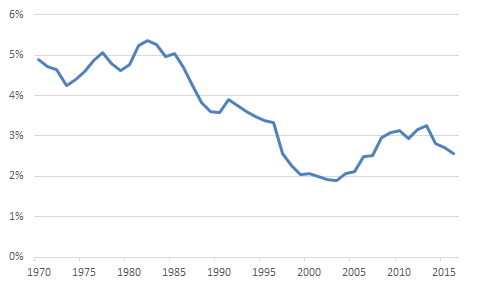 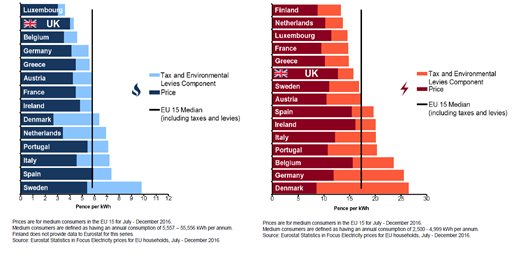 Costs and profits of the big energy companies are a very contentious topic which has been at the centre of several public and policy debates in the last years. Claims of excessive price rises and profits by energy companies stand next to more than substantial write offs by utilities in recent years due to the transformation of energy markets devaluing their fossil fuel assets.

The big 6 energy suppliers are obliged to reveal their annual costs, revenues and profits to Ofgem. For the year 2016 they reported EBIT margins (defined as earnings before interest and tax divided by total revenue) between -6.3% (npower) to 7.2% (Centrica) for their combined domestic (i.e. residential) gas and electricity supply businesses with an average of 4.5%. While the suppliers’ aggregate margin has steadily increased from 0.9% in 2009 to a record 4.5% in 2016, the margins differ significantly between companies and years. npower and EdF have been making losses in the majority of the covered years (Figure 9). 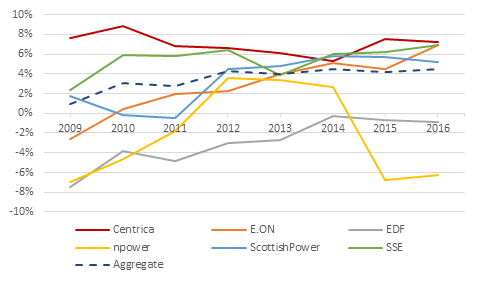 Reports about potentially high profits of energy companies have gained a lot of media attention in recent years. In 2016, a study by PWC for Energy UK on expected costs and revenues of big electricity and gas suppliers in the UK suggested profit margins of up to 28% per dual fuel bill, instead of the 4% claimed by the industry and used by Ofgem. In July 2017, Citizens’ Advice estimated that network companies such National Grid would be making unjustified profits of £7.5bn over a period of 8 years, which would correspond to a 19% profit margin. In September 2017, a report by think tank ECIU claimed the 6 electricity distribution grid companies made an average profit margin after tax of 32 per cent a year between 2010 and 2015.

The Competition and Markets Authority (CMA) has concluded in 2016, that Ofgem lacks requisite information to assess generation and retail profitability. It identified a lack of financial transparency due to the complexity of big energy companies’ operations and their reporting practices as well as differing accounting regimes between companies, which had been recognised before by parliamentary committees, consumer groups and Ofgem. Consequently, the CMA proposed a reform package for the financial reporting requirements for energy suppliers.