The UK has been a net importer of crude oil since 2005. The trade imbalance can be linked to a long-term decline in oil production from the UK’s North Sea.

The Netherlands, Germany and France, are the top export destinations for UK oil and together they comprised 52% of the total oil export in 2018. China is the second biggest export market for the UK oil, followed by South Korea.

The total value of UK oil exports rose until 2013, mainly due to a decade-long surge* in oil prices driven by the rise in global demand as well as due to instability of oil supply from the Middle East. The collapse of oil prices in the second half of 2014 led to a fall in export value by 40% compared to the peak year of 2013. In 2018 the total value of UK exports of crude oil was £17.5 million.

62.1% of the value of UK exports of crude oil comes from EC destinations 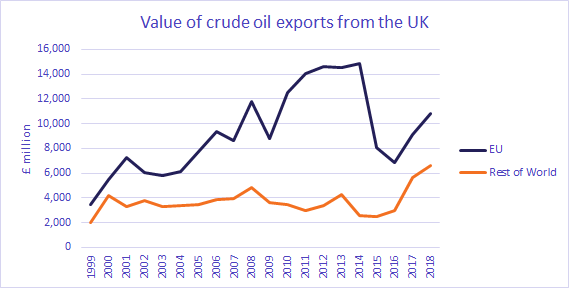 *The long-term surge in oil prices was temporarily disrupted in 2008 and 2009 by the global financial crisis.