The rankings for oil production and consumption reflect the political and economic situations of the countries concerned as much as their own oil reserves.
The USA, with vast reserves of oil and benefiting from a stable, democratic government, was consistently one of the top three oil producers, and always the top consumer.
Saudi Arabia, also with vast reserves of oil, was always one of the top three producers - but until the early 21st century, when their refining capacity more than tripled, exported most of its oil rather than using it for themselves.
Japan, having few natural resources, never appears high in the list of producers, but as a stable, technologically advanced country, has always been amongst the top consumers.
The BRICs (Brazil, Russia, India and China) countries, have all appeared amongst the top ten consumers since 1997, with India and China showing the greatest rise in ranking.
The UK dropped out of the top 10 producers after 2002 due to declining production in the UK North Sea as its offshore fields mature; which coincided with the rise in production by Canada, Kuwait, Iraq, etc.  The UK’s ranking for consumption of oil also fell due to recession, but also to increased energy efficiency measures, the use of renewables and the rise in consumption by the BRICs countries.

Other developed countries, such as France, Germany, Italy and Canada have also seen their consumption rankings fall.

Iraq dropped down in the rankings of oil producers in the 1990s due to the embargo imposed by the USA, but since 2003 their production has increased so they are now ranked 5th. 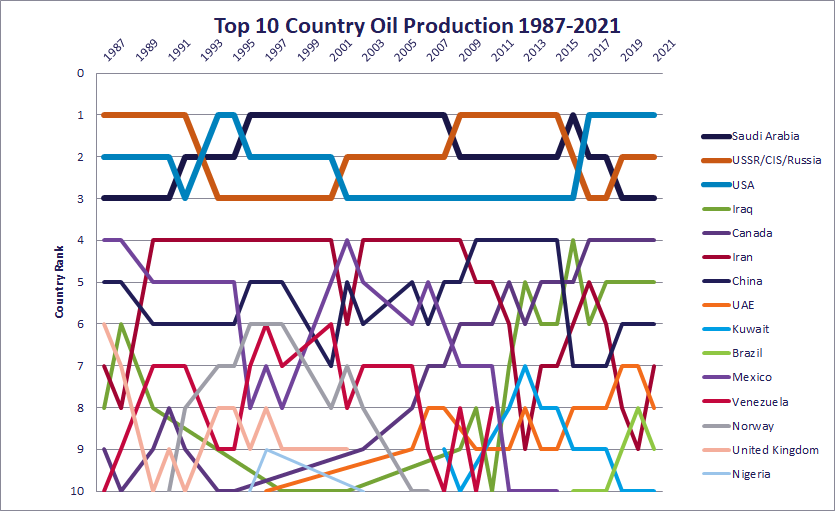 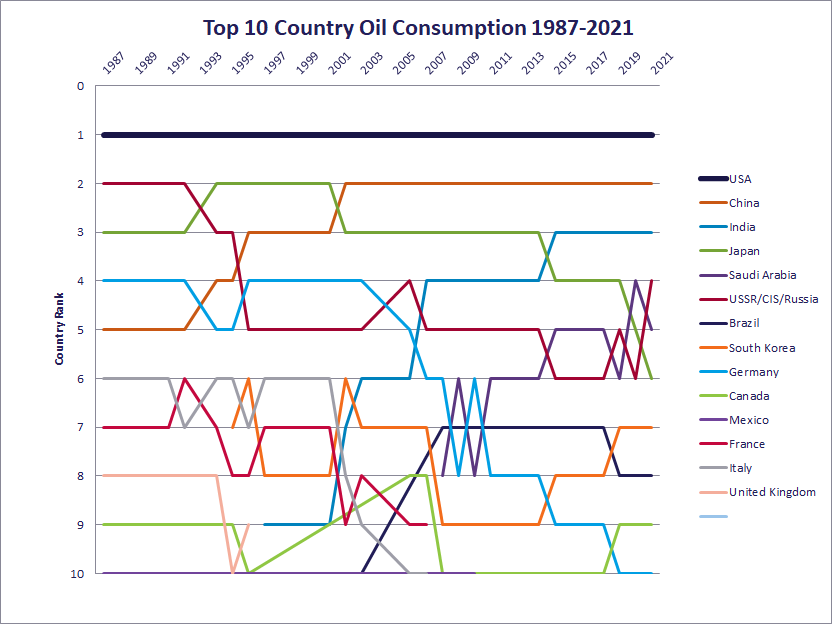 The rank of most countries on the list of top oil reserves has not changed significantly since the late 1980s. Reserves increase as new reservoirs are discovered, existing reservoirs are extended, and oil recovery is improved; meanwhile, production slowly depletes reserves. These developments have aggregated to a slow but steady increase in reserve estimates around the world. However, there are two significant departures from this mostly gradual changing in rank; Venezuela and Canada.

From 2007 to 2011, Venezuelan oil reserve estimates steadily rose, pushing the country's reserves from 7% of world reserves to 18%, surpassing Saudi Arabia as the country with the world's largest reserves. This significant rise through the ranks stemmed in large part from the discovery and inclusion of the heavy crude oil of the Orinoco Oil Belt in reserve totals.

In a similar, but far more drastic manner, Canada's extensive Alberta oil sands pushed the country from gradual reserve decline to the third largest oil reserves within a matter of several years. While both Canada's and Venezuela's reserve numbers are impressive, the percentage of the heavy oil produced from these newer reservoirs remains to be seen, given the current, relatively low, oil price. 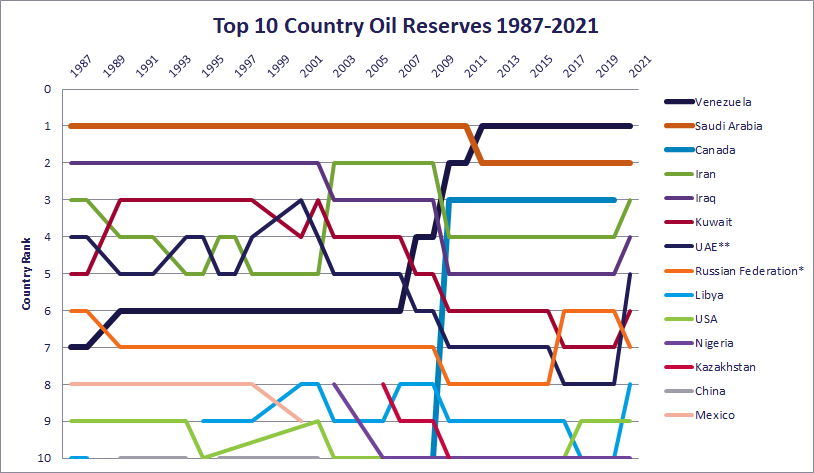 The Need for Strong Caveats on Proved Oil Reserves and on R?P Ratios  RW Bentley, September 2018