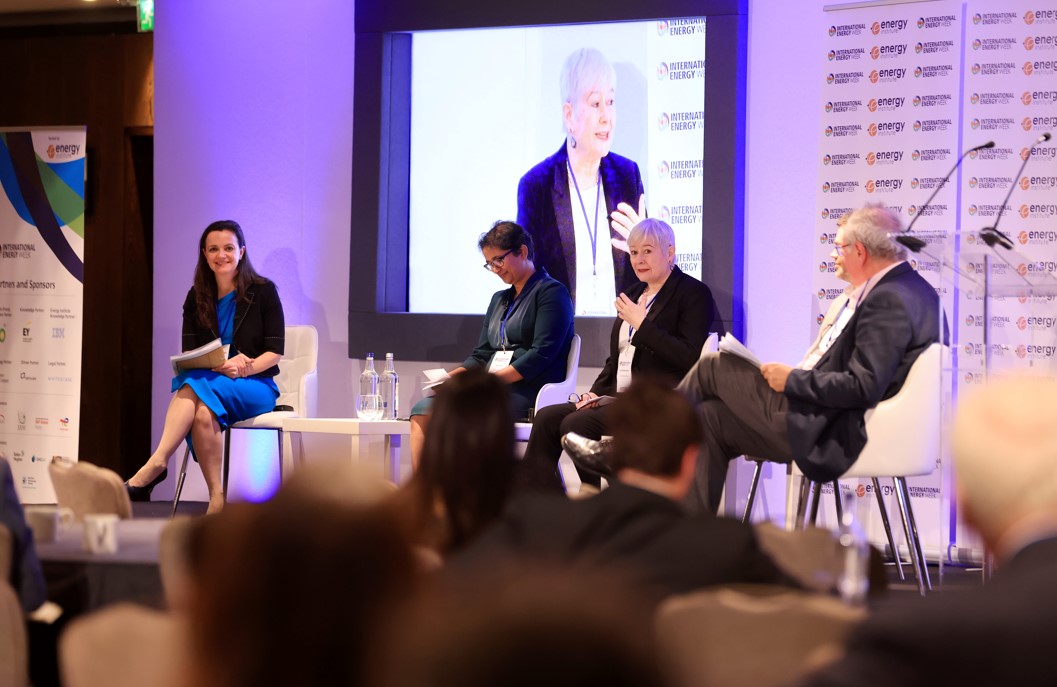 The implications of COP26 for the energy sector’s transition to net zero, and fresh concerns about energy security sparked by the Ukraine crisis, were centre stage at last week’s International Energy Week conference, hosted by the Energy Institute.

A thousand online delegates and hundreds in person in London gathered to hear and engage in discussions between almost one hundred speakers and moderators drawn from industry, government, NGOs, investors and academia.

Opening the conference, EI President Steve Holliday FREng FEI set the scene, saying the case for action seen at COP26 across governments, businesses and societies is now “here to stay”. The economic and financial drivers are “turning on their head”, he said, pointing to the dramatic cost reductions in clean energy technologies and demands from investors for companies to cut their exposure to climate risk. He highlighted the “pioneering spirit and engineering achievement” already seen in hydrocarbons, now delivering low carbon alternatives such as offshore wind power.

Alongside the climate crisis and COP26, discussion inevitably turned to the tragic events in Ukraine and heightened concerns about security of supply and consumer prices. UK Energy Minister Greg Hands MP drew the two challenges together, saying “Net zero is part of the solution, not part of the problem here. Moving to energy-secure, domestically-produced robust renewables and nuclear, that is our energy future in a net zero world, while still recognising the importance of oil and gas in the transition.”

Greg Jackson FEI, CEO of Octopus Energy Group and EI Vice President, set the conference’s sights clearly on consumers, saying “Moving to clean, cheap renewable energy is a huge opportunity for citizens around the world to enjoy better life. A mistake made during the first phase of the transition was to see it as done to customers, not with them or for them. What we need to do now is to put the customer, the citizen, the voter at the very heart of it.”

However, the scale of the behaviour change challenge was flagged by the Cabinet Office’s Moira Nicolson as a “big mountain to climb” and John Browne HonFEI, Chairman of BeyondNetZero, pointed to the need for greater diversity in the workforce to get the robust solutions needed – “In the energy transition, we need to examine what different people want and their differing needs".

There was clear frustration at the pace of progress in key areas of decarbonisation from a number of speakers. On reducing flaring and fugitive methane emissions, Dr Mark Davis, CEO of FlareIntel said "It's not rocket science, it's plumbing. We need to just get on with it." On CCUS, GE’s Martin O’Neill said “Let's get out of pilot mode and into mature market scaling, not in 2030, not in 2040, but now.” The need for pace was echoed by Climate Group Chair Joan MacNaughton CB HonFEI., who said “The deadline is not 2050. We’ve got to frontload the investment, frontload the action to now!”

And Secretary General of the Commonwealth Patricia Scotland QC made a passionate and evidenced plea on behalf of developing countries - "We must shift our focus and philosophy to support small states through the energy transition. If small states lose then we all lose".

Delegate feedback has been positive, with the conference described as “a stellar programme” with “an inspired choice of speakers”. The dates for International Energy Week 2023 will be announced soon. In the meantime, look out for more about the 2022 conference in New Energy World on 16 March.