Transport (not including international aviation and shipping) was the single most polluting sector for UK emissions in 2019, accounting for approximately 120Mt CO2, (34% of total). But the COVID-19 pandemic of 2020 saw this reduce to 97.2Mt CO2, 19.6% lower than in 2019, and account for 29.8%  of the UK total CO2 emissions. While transport emissions have been falling since 2007, mainly thanks to improved fuel efficiency, the sheer number of cars on the roads, coupled with a growth in distance travelled on roads (although 2020 was an exception due to COVID 19), has prevented further improvements. Changing trends in the types of vehicles, and more crucially, the types of fuels used to power these vehicles, could lead to much more substantial reductions in emissions in the future.

While private vehicle ownership has continued to grow, the opposite has been true for the number of public transport vehicles.  After peaking in 2005 (178,000), numbers have declined by 12% as many rural bus services have been discontinued. 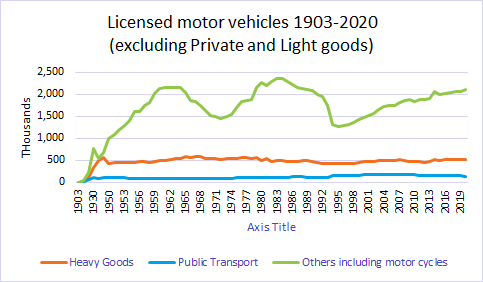 Transport - fuel: number of petrol stations in the UK 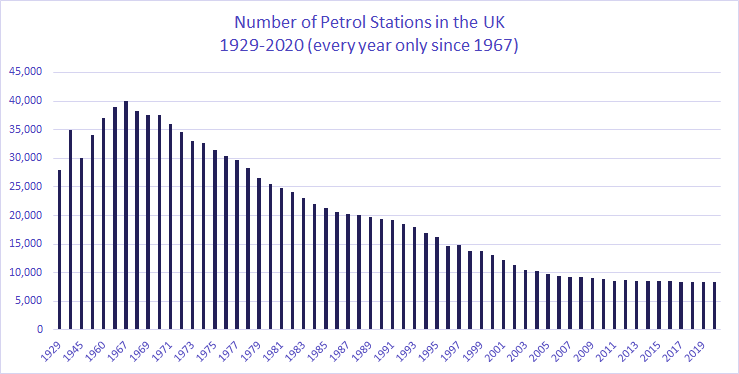 Pre-1967 data are estimates
Fuel retail outlets in the UK are branded with major oil company logos, independents or supermarkets. Many company branded sites are in fact owned or operated by independent dealers. The market leaders in 2020 were BP with 1225 outlets followed by Esso, Shell, Texaco, Tesco and Gulf. 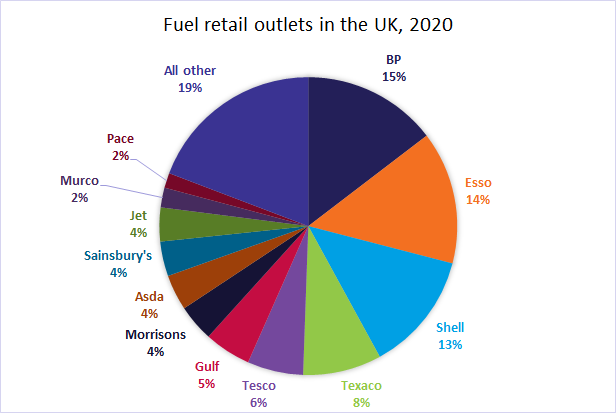 The largest supermarket brand Tesco has 509 sites, followed by Morrisons, Asda, and Sainsbury's.   Despite having just 19% of outlet share, these four supermarkets continue to hold the leading market share of over 35% of total UK fuel sales.
The future business models of petrol stations will be impacted by the demand for alternative fuel types, and the increased use of electric vehicles (EVs). The Automated and Electric Vehicles Bill introduced in the Queen's speech in October 2017 makes it mandatory for motorway services and large fuel forecourts to install EV charge points. The UK’s network has grown rapidly; as of the end of 2020, almost 36,000 charging points have been installed. Additionally, under Prime Minister Boris Johnson’s plan for a ‘green industrial revolution’, sales of new petrol and diesel vehicles will be banned in the UK from 2030. As such, it is likely that EV infrastructure will grow even more rapidly in the years to come.
See below for data on how UK fuel usage by vehicle type is changing.

Total fuel use for road vehicles in the UK has remained relatively steady over the period 2011 to 2019; however, the types of vehicles using this fuel have changed slightly. 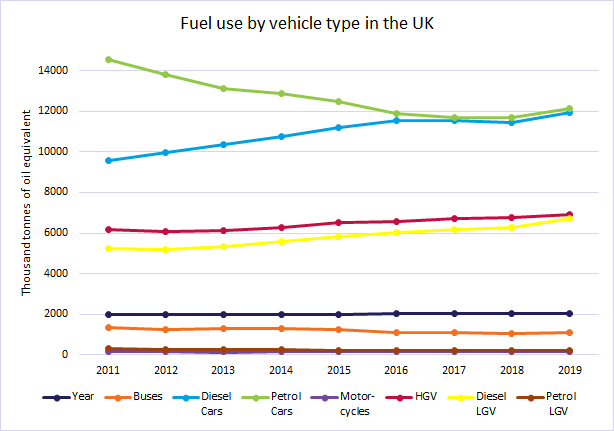 In the early 2000s, vehicle users were encouraged to switch from petrol to diesel - diesel cars have high fuel efficiency and produce less carbon dioxide (CO2) than petrol-powered equivalents. This can be seen in the data, as a decline in the use of petrol has been matched by the increase in use of diesel engine road vehicles (DERV). However, an unintended consequence of this was an increase in the levels of pollutants such as nitrous oxides (NOx) and particulates. Additionally, the 2015 ‘dieselgate’ scandal revealed that car companies such as Volkswagen had been manipulating emissions tests to make diesel cars appear cleaner than they were. As a result, incentives have been removed and drivers are  now either switching back to petrol cars or exploring new technologies, such as battery electric vehicles (BEVs).