The UK electricity industry has been completely transformed in the 2010s thanks to the introduction of new low-carbon sources of electricity generation - mainly wind and solar. In 2010, over three quarters of all UK electricity was produced by burning coal and natural gas, with renewables (wind, solar, hydro, biomass) making up less than 4% of total generation. Fast forward just nine years and in 2020 renewables made up a record 43.1% of UK electricity generation, and over half (59.3%) of all electricity generated was from a low carbon source (includes nuclear power). This transformation will continue in the 2020s; remaining coal power plants are set to be phased out entirely by 2025, and major power producers are investing in new large-scale solar and wind projects.

UK electricity use, overall and by sector 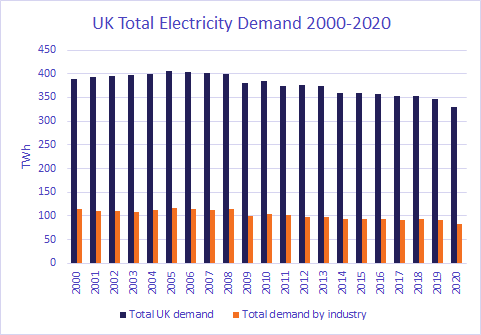 This drop in demand can be partially attributed to improving energy efficiency measures - consumption since 2010 is down by over 12% in both the industrial and domestic sectors. Losses (transmission, distribution and theft) accounted for just under 8% of demand in 2018. Electricity consumption for transport increased almost 10% between 2018 and 2019 - this is mainly due to the increased used of electric vehicles (EVs). 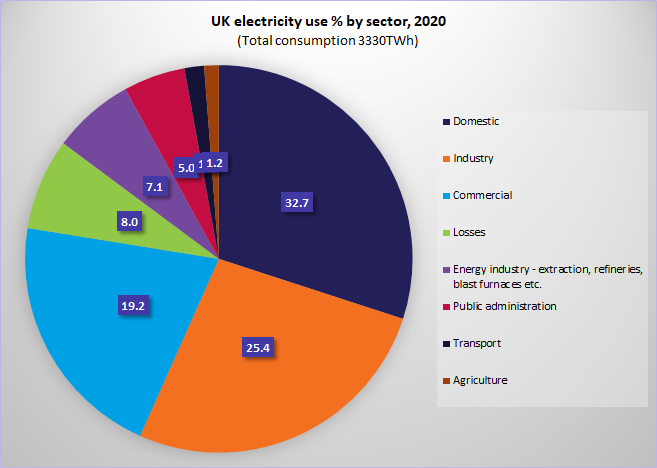 Average UK electricity demand varies between 30-40GW, depending upon the season, weather and time of day. As of May 2020, natural gas is the largest source of electricity generation capacity available, with a combined peak output of over 32GW. However, renewable sources are catching up - for example, if every wind turbine (onshore and offshore) was generating electricity at the same time, they would produce around 24GW of power. In practise this is unlikely, as renewables such as solar and wind are intermittent sources of generation - they can only output power at certain times. As the proportion of renewables connected to the grid increases and sources such as coal (easy to switch on and off) are removed, additional storage, careful manage of energy demand and other flexibility measures will be required. 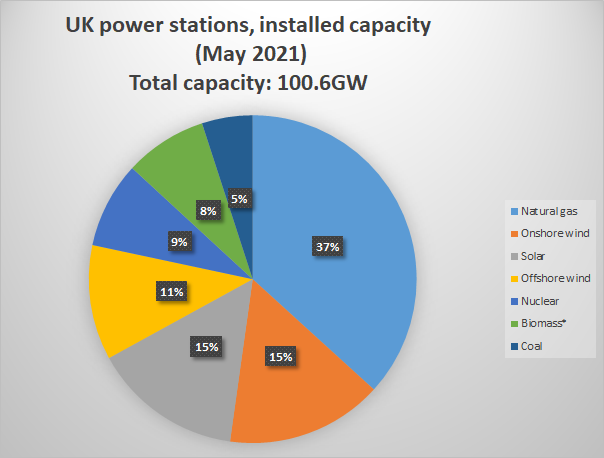 As of May 2020, coal-fired power stations could still provide a peak output of 6GW to the grid if required; however, coal’s share of power generation in the UK has collapsed in recent years from 30% in 2010 to a record low of 2.6% in 2020. This is primarily due to the UK Government pursuing a phase-out all remaining coal-fired power stations by 2025, a policy that was proposed in 2015 and confirmed in January 2018. The number of active coal-fired power stations operating has fallen from 14 in 2015, to just four in July 2020. Recent closures include Cottam and Aberthaw, shut in 2019, and Fiddler’s Ferry, shut in March 2020. Drax have indicated that they will shutter all remaining coal burning operations in March 2021. 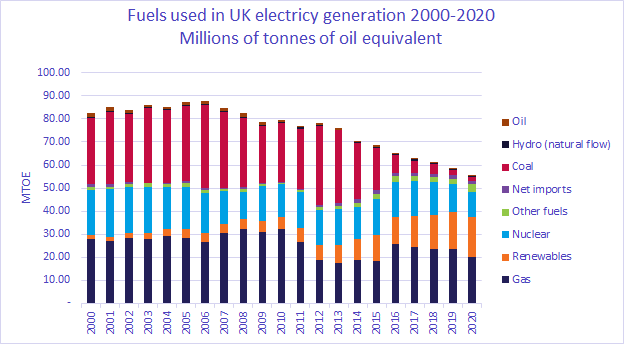 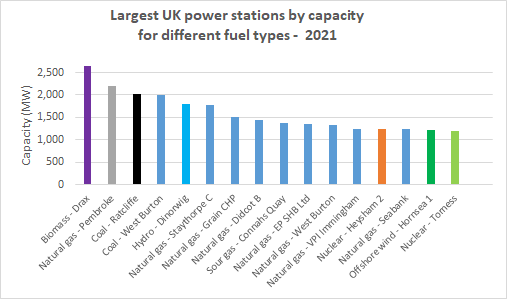 Traditionally, power generation in the UK has been centralised in large power plants connected to the national transmission network. However, with the advent of greater renewable generation capacity, there has been a shift to smaller, decentralised installations, such as solar farms and wind turbine arrays which can connect directly to local distribution networks. Total solar-powered generation capacity has grown to over 13GW, despite the fact that most solar power assets are small - the largest individual solar installation is less than 100MW in size. There is a similar story for onshore wind. However, major power producers are investing heavily in offshore wind farms, which are more complex technical operations. As of 2020, the UK now hosts the world’s largest offshore wind farm - Hornsea One, which can produce over 1GW of electricity when fully operational. Even larger installations are planned for the future, for example Dogger Bank, a joint venture between SSE and Equinor .

Combined heat and power (CHP), also known as cogeneration, is the process of capturing and using any heat that is a by-product of electricity generation. This greatly increases efficiency (80-90%) and can reduce energy costs and carbon emissions, by reducing the need for additional heating systems. CHP is already popular in many European countries with cold winters, such as Finland, Denmark and Latvia. In the UK, the total capacity of CHP schemes has remained fairly constant since 2010, at approximately 6GWe. A reduction in the number of large CHP projects (>10MWe) has been compensated for by an increase in the number of small projects, particularly in the 2MWe to 10MWe range. The types of buildings that commonly use CHP schemes in the UK are leisure centres, hotels and hospitals. 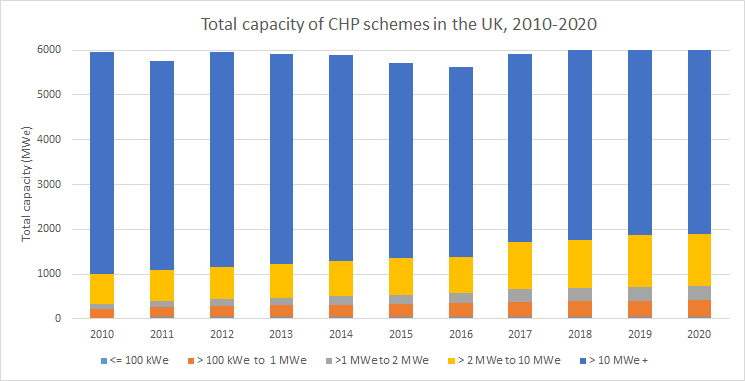 The Department for Business, Energy and Industrial Strategy (BEIS) has launched an initiative called CHP Focus to support development of further projects. This includes a CHP site assessment tool, a suite of developer guides, case studies and outreach events.
Click here to find out more.

By increasing the efficiency of power plants and reducing the need for additional heating, CHP schemes help to cut greenhouse gas emissions. However, it is important to note that the majority of schemes in the UK are still powered by fossil fuels, mainly natural gas.
All data for charts sourced from Digest of UK Energy Statistics (DUKES), Dept. for BEIS