Energy insight: Energy efficiency policies and regulations in the UK

From 2002 to the end of 2017, total energy consumption in the UK fell by 10 percent  – and this despite the population rising by 19% from 55 million to over 66 million in the same period. This was achieved, in part, by increased energy efficiency. 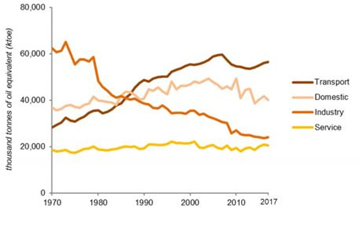 Final Energy Consumption by Sector in the UK, Department for Business, Energy & Industrial Strategy (BEIS)
To meet the legally binding target, laid down in the Climate Change Act 2008, of reducing the UK’s greenhouse gas emissions by at least 80% below base year levels by 2050, more has to be done to reduce the use of hydrocarbons for energy. Improving energy efficiency is one of the major potential solutions.

What government policies and regulations exist in the UK to make us more energy efficient?

Under the Energy Efficiency Directive (2012/27/EU), from 1 January 2014 to 31 December 2020, EU Member States are obligated to achieve energy savings. They must do this by using Energy Efficiency Obligations Schemes and/or other targeted policy measures to drive energy efficiency improvements in households, industry, buildings and transport.
The various clauses of the EED are transposed into UK law by the passing of Statutory Instruments (SIs), such as The Energy Efficiency (Encouragement, Assessment and Information) Regulations 2014 which transposes articles and annexes, amends Directives such as that on ecodesign requirements, and repeals previous Directives.
Different SIs implement different aspects of the EED. For example The Heat Network (Metering and Billing) Regulations 2014 implements the requirements of the EED in respect of the supply of distributed heat, cooling and hot water.
There are over 200 results on the UK legislation site relevant to the Energy Efficiency Directive, including many recently laid before Parliament due to Brexit.
Article 7 of the Energy Efficiency Directive sets a target for 1.5 percent annual reduction in energy sales to end users through the end of 2020.
The UK’s approach for complying with Article 7 is set out for the period 2010-2020; and the progress of the UK’s national energy efficiency action plan is reported annually. The April 2017 report indicated that since 2007, industrial energy consumption fell by 23%; household energy consumption fell by 12%; passenger transport consumption fell by 8% (although passenger kilometers increased by 6% since 2014); and road freight transport decreased by 3%.

Article 8 of the EED is discussed in further detail below.

The Building Regulations 2010 “are minimum standards for design, construction and alterations to virtually every building. The regulations are developed by the UK government and approved by Parliament.”
Approval is required for building work on new and existing buildings for, amongst other things:
Part L of the Building regulations concerns conservation of fuel and power. It lays down the maximum heat conduction, or U-values, for roofs, walls, floors and windows for new buildings, and alterations to existing buildings.

Who makes sure Building Regulations are complied with?

Local authorities have the duty of making sure that any building work in their area complies with the Building Regulations. Advice can be found for homeowners, professionals such as architects and builders, and local authorities on the Local Authority Building Control website.

The ESOS Regulations 2014 are the UK's implementation of the EU Energy Efficiency Directive Article 8 (4 to 6). These regulations make it mandatory for UK organisations employing 250 or more people, or with an annual balance sheet total in excess of 50 million euro (£38,556,700), to carry out annual audits. The audits must include an estimate of total energy consumption covering buildings, industrial processes, and transport, and must identify energy saving opportunities. However, there is no regulatory requirement for organisations to implement the energy saving opportunities identified.
The audits must be carried out by an approved ESOS Lead Assessor such as those approved and listed by the Energy Institute.
Standards
Organisations are encouraged to use ISO 50001 Energy Management systems standard which provides a framework to help implement an energy management system. Training is available, such as that offered by BSI or the Energy Institute.

Businesses can benefit from tax breaks when investing in eligible energy-saving equipment. Plant and machinery that demonstrates a high standard of energy efficiency has been independently evaluated across 17 separate technology categories. Purchases of the equipment receive accelerated tax relief by claiming a 100% capital allowance in the year of purchase.
Technologies that qualify for the ECA scheme are listed on the, free to use, Energy Technology Product List.
There are guides for manufacturers on how to make the most of the list, such as the 'Manufacturer’s toolkit for lighting' September 2018.

Lighting and other energy-using products

With the introduction of The Ecodesign for Energy-Using Products Regulations 2007 the UK implemented an EC Directive since superseded by further directives.
The Carbon Trust estimates that “up to 40% of a building's electricity use is accounted for by lighting”.
Energy-hungry incandescent light bulbs have been unavailable for purchase in the UK since 2009 and halogen light bulbs were gradually phased out from 2016 and completely banned for sale from October 2018.
The Energy Efficiency (Ballasts for Fluorescent Lighting) Regulations 2001, implements an EC directive on minimum standards for energy efficiency of fluorescent lighting put into effect the EC Directive 2000/55/EC aimed at reducing energy consumption for ballasts for fluorescent lighting.

Resources for those overseeing lighting upgrades can be found in the EI's Lighting Guide.

The CRC (Carbon Reduction Commitment) Scheme, introduced by BEIS and the Environment Agency in July 2015, aimed to incentivise energy efficiency and cut emissions in large energy users, in the UK's public and private sectors, by making them buy allowances for every tonne of carbon they emit.
But after consultation with industry and other bodies, this scheme is due to be closed following the 2018 to 2019 compliance year. It will be replaced by an increase in the Climate Change Levy.  Measures will also be taken to reduce the ratio of gas to electricity used for energy, with an aim to reach a 1:1 ratio by 2025.
The Government’s new reporting framework – the Streamlined Energy and Carbon Reporting (SECR)  – came into effect on 1 April 2019.  For more information see our Energy Insight: Streamlined Energy and Carbon Reporting (SECR).

The ECO scheme, which started in April 2013, is administered by OFGEM on behalf of BEIS. The scheme obligates suppliers under the Home Heating Cost Reduction Obligation (HHCRO), to improve the ability of low income, fuel poor and vulnerable households to heat their homes. This includes upgrading inefficient heating systems.
The UK government has introduced various other measures to help combat fuel poverty by making households more energy efficient. See our Energy Insight: Fuel Poverty in the UK.

Tax incentives and grants for energy-saving products in homes

For some energy-saving products, such as loft insultation, a reduced rate of 5% VAT is charged. There are also reduced VAT rates for certain qualifying people for installation of heating appliances.

However for most people, VAT at 20% is still levied on home improvements such as double-glazing and energy efficient boilers.
Various grants are available for some qualifying residents, eg. for installation of cavity wall insulation, upgrading of boilers, and loft insulation – paid for by the energy suppliers under the Energy Company Obligation (ECO) Scheme.

The government is requiring the energy suppliers to offer each of their customers a smart meter by the end of 2020 (although customers can refuse to have one installed). The idea is that people will be able to see how much energy they are using, and what it is costing, in real-time, thereby enabling them to better manage their energy use.

It could be argued that the high percentage of duty and VAT on road fuel has encouraged the design of more energy efficient vehicles as well as a reduction in journeys. However, the rate of duty per litre (eg, 57.95p for unleaded petrol) has remained unchanged since 2011, with the 20% rate of VAT static since 2012.
While the number of vehicles on UK roads has continued to rise steadily, fuel consumption by road vehicles has remained much the same over several years. 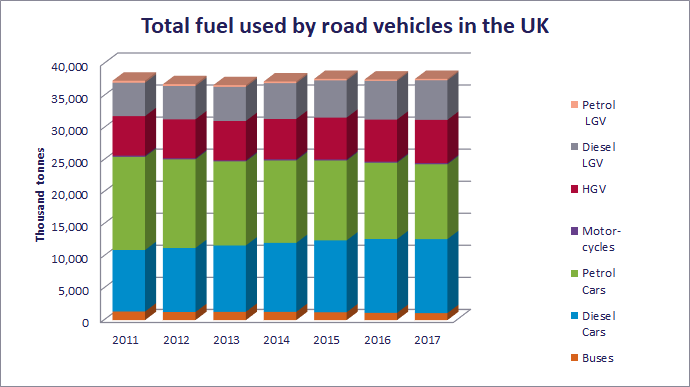 Source: Energy Insight: Transport - fuel: UK road transport energy consumption (DSS23a)
Transport, however, still accounted for 40% of the total energy used in the UK in 2018.
The IEA in their report Fuel Economy in Major Car Markets: Technology and Policy Drivers 2005-2017 states that, for newly registered vehicles in the UK, while the average fuel economy of “various vehicle segments improved in the 2005-2014 period, … it has generally stagnated since.”

What for the future?

Having begun to address large organisation efficiency through ESOS, in his Spring Statement in March 2019, the UK Chancellor of the Exchequer set out the government’s intentions including plans concerning energy efficiency for smaller businesses:
An Energy efficiency scheme for small and medium sized businesses: call for evidence has been launched by BEIS for the period 13 March 2019 – 8 May 2019, to “help smaller businesses reduce their energy bills and carbon emissions…to explore how [the Government] can support investment in energy efficiency measures”.  And on 13 March 2019 the UK Government opened a competition which is making available up to £6m of funding for the development of new business models that allow for the aggregation and scaling up of delivery of small-scale energy efficiency building projects in the commercial industrial sectors
The Chancellor also stated “to help ensure consumer energy bills are low and homes are better for the environment, the government will introduce a Future Homes Standard by 2025, so that new build homes are future-proofed with low carbon heating and world-leading levels of energy efficiency”.

UK government’s Industrial Strategy Challenge Fund, being delivered on behalf of the UK government by UK Research and Innovation, aims to “strengthen UK science and business innovation and take on the biggest challenges that society and industry face today.” This includes ensuring that the UK prospers from the energy revolution including moving to a low-carbon, more resource-efficient economy. As reported in May 2018, £102.5 million will be invested in developing smart, clear energy systems.

Energy efficient Scotland - Scottish Government.  "The Energy Efficient Scotland programme builds on existing legislation and programmes that are already supporting the improvement of the energy efficiency of homes, businesses and public buildings, as well as the work we are doing with local authorities to develop Local Heat and Energy Efficiency Strategies (LHEES)."