Energy Insight: Energy in the Horn of Africa (Somalia, Somaliland, Puntland and Djibouti)

Is it possible that one of the poorest areas of the world could become one of the wealthiest?

There is reported to be a potential total resource of 30 Bbbl of oil offshore Somalia and the Somali federal government has just announced their first offshore licensing round for 15 blocks. 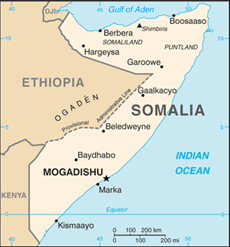 A very brief history of states since 1960

Somalia, comprising Somaliland, Puntland and Somalia has been an independent state since 1960. Its federal government has warned foreign companies that, if they make contracts with the autonomous regions of Somaliland or Puntland, they may forfeit any further engagement with Somalia.

Internal conflict between warlords trying to take power broke out in 1961, almost immediately after independence was gained, and Somalia has suffered from unrest ever since. This caused the relatively peaceful regions of Somaliland and Puntland to break away to form independent states.

Somaliland was a British protectorate from 1884 to 1960, after when it was united with the former Italian Somaliland to form Somalia.
Situated between Djibouti and Puntland and the east of Somalia, Somaliland, in the north, has been a self-declared independent state since 1991. Despite having a working political system, government institution, its own police force, and currency it is not internationally recognized as a separate state. And because it is not internationally recognized, no official statistics are available for Somaliland on its own.
Puntland located in the North-East tip of the horn of Africa, and formerly part of Italian Somaliland, also declared itself an autonomous state in 1998. Unlike Somaliland it does not seek to be fully independent from Somalia.
Italian Somaliland comprised the area which is now the official state of Somalia, minus the area of British Somaliland in the north.
It should be noted that for most of the energy statistics available, Somalia and Somaliland are not separated.
Djibouti, formerly French Somaliland, did not gain independence from France until 1977.

How do the countries source energy now?

In 2016, 100% of both Djibouti’s installed electricity generating capacity (130 Megawatts), and Somalia’s installed generating capacity (80 Megawatts), used combustible fuels. From this Djibouti produced 405 Gigawatt hours, and Somalia 350 Gigawatt hours. (Ref: 2016 Energy Statistics Yearbook, United Nations, 2018).
None of the countries reported using nuclear, wind, solar or any other renewable form of energy, other than fuelwood and charcoal, to generate electricity.
In 2013 only 50% of the total population of over 800,000 in Djibouti had access to electricity.  61% of urban areas were electrified but only 29% of rural areas, where the inhabitants are mainly nomadic. (CIA figures).
Somalia fared even worse for access to electricity. In 2013, 45% of the population lived in urban areas, but only 33% of urban areas had electrification. Only 4% of rural areas had electrification. 8.9 million people were without electricity.

There are no oil refineries in the Horn of Africa - all oil products have to be imported, though some may subsequently be exported or held in bunkers.
Somalia, in 2017, exported livestock, bananas, hides, fish, charcoal, and scrap metal  to Oman, Saudi Arabia, UAE, Nigeria, Yemen and Pakistan; and imported manufactured goods, petroleum products, foodstuffs, construction materials and khat from China, India, Ethiopia, Oman, Kenya, Turkey, Malaysia (2017). A few gas stations have been developed in the Somali capital Mogadishu in recent years.
Djibouti, in 2017, exported, hides and skins, scrap metal and reexported some commodities to Ethiopia, Somalia, Qatar, Brazil, Yemen, and the USA; and imported foods, beverages, transport equipment, chemicals, petroleum products, clothing from UAE, France, Saudi Arabia, China, Ethiopia, and Yemen.

Republic of Djibouti
Until Oyster Oil and Gas limited, a Canadian Company, started work in Djibouti in 2012 there had been no oil exploration carried out despite significant oil and gas production in nearby Yemen, and the discovery of hydrocarbons in Eritrea, Ethiopia, Somalia and Uganda. Oyster signed a production sharing contract (PSC) with the government of Djibouti in September 2011, and was awarded four blocks covering an area of 14,1000 km2. In 2013 Oyster were offering farm-in opportunities.

In March 2017 Oyster announced that they had "received Government of Djibouti approval to commence exploration activities under Phase III of the Production Sharing Contract ("PSC"). Phase III is for a duration of three years to the end of February 2020".

However, by 2018 the CIA were still reporting that, in 2017, Djibouti had neither reserves, nor production, of crude oil or natural gas.
Somalia, Somaliland and Puntland
Somalia
Although exploration for oil in Somalia began in 1945, only 6 wells had been drilled offshore by 2014.
The international oil companies (IOCs) left in 1991 when the Somali President was overthrown by warlords and the country became politically unstable and unsafe.
By 1 January 2018 the CIA were still reporting that Somalia had no proven crude oil reserves, and that they neither imported, nor refined, any crude oil. But in 2016 they were consuming 5.600 bbl/day of refined petroleum products.
And, although they neither consumed, imported, nor exported natural gas, the CIA were reporting that Somalia had 5.662 billion cubic metres of proven natural gas reserves at 1 January 2018.
2019 Somalia Licensing round
Somalia has a long coastline, and at the end of January 2019 Somali government announced their first offshore licensing round for 15 blocks.
There is reported a potential total resource of 30 Bbbl offshore Somalia. This is considered a “frontier area” and very little exploration activity has taken place so far.
The Somali government has been working hard to sort out the necessary oil laws for the country, Production Sharing Agreements, and other fiscal matters to make investing in offshore Somalia attractive to foreign companies while benefiting their country.

According to Spectrum Geo, Somailia's federat government approved the new Petroleum Law and Revenue Sharing Agreement in May 2019, so Production Sharing Agreements (PSAs) can now be signed.

Offshore Engineer reported, on 6 August 2020, that the oil and gas auction for seven deepwater offshore blocks, in Somalia's first licensing round, opened on 4 August 2020.   The winners are expected to be announced in the first quarter 2021.

Problems
The ongoing unrest in the country, caused by Al-Shabab insurgents, rival war lords, and the influx of refugees from other war-torn areas such as Yemen, will also put off foreign investors, as will human rights concerns, although the situation has been calming since an internationally backed government was elected in 2012.
And Kenya and Somalia have a long-term maritime border dispute, awaiting resolution by the International Court of Justice, with Kenya claiming some of the maritime areas offered by Somaila in the February 2019 auction.