The following Energy Insight provides you with information regarding air quality policies and initiatives around the world, offering a brief introduction to:
• The common sources of air pollution and the effects of exposure
• The Clean Air Acts (UK)
• Initiatives and policies in London and the rest of the UK
• ProAire and Plan Verde in Mexico
• Pollution in New Delhi, India
• China’s Five Year Clean Air Action Plan

The Common Sources of Air Pollution

Road transport: The emissions from a car involve the combustion of petrol or diesel fuel, leading to the production of exhaust gas, which contains harmful pollutants such as carbon monoxide, nitrogen oxides, volatile organic compounds and other particulate matter. However, in an attempt to mitigate this problem, most modern vehicles contain a filtering control device, such as a three-way catalytic converter.

Stationary combustion sources: One of the main sources of air pollution is combustion plants, which are usually the largest sources of pollutants in most developed countries. These can be sources of nitrogen oxides and sulphur dioxide emissions and, in specifically coal and oil plants, volatile organic compounds are commonly emitted. Flue gas desulphurisation can reduce emissions from coal-fired power plants and electrostatic precipitators can limit particulate emissions.

Other industrial sources: These are often esoteric pollutants released as fugitive emissions from specific chemical plants. Due to their nature they can be difficult to quantify. The effects of the release of emissions are smaller, especially compared to that of stationary combustion sources and road transport.

Intermittent and poorly defined sources: This is usually seen in sporadic events, such as forest fires or bonfires that release nitrogen oxides, carbon monoxide, volatile organic compounds and other particulate matter. This is a larger contributor to poor air quality in less economically-developed countries, where the burning of biomass, such as for cooking or in ‘slash and burn’ agricultural techniques, is more prevalent.

The Effects of Human Exposure to Air Pollutants

The World Health Organisation estimates that more than 2 million premature deaths each year can be attributed to the effects of urban outdoor air pollution. It must be noted that individuals with pre-existing health issues, such as asthma, are more susceptible to the effects of air pollution, especially those pertaining to respiratory functions. Some volatile organic compounds are also potentially carcinogenic, resulting in a higher risk of lung cancer. 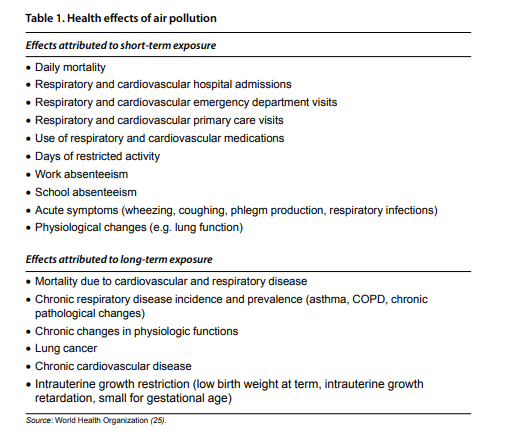 In early December 1952, after a period of windless anticyclonic weather, the Great Smog descended on London. Visibility fell dramatically as London grinded to a halt. Medical reports from the time suggest that approximately 4,000 people died following that week.

This prompted the government to create the 1956 Clean Air act, aimed at limiting particulate pollutants, especially in urban areas such as London and Manchester. They began to control the emission of smoke, dust and grit from commercial and industrial facilities. Smoke control areas were set up to prohibit ‘dark smoke’.

Following a period of backlash over the ineffectiveness of the 1956 Clean Air Act, the 1968 Clean Air Act was implemented as an addendum to the original. This made it illegal to emit ‘dark smoke’ from a chimney; ‘dark smoke’ was later defined as darker than shade 2 on the Ringelmann chart. This gave the government power to limit the emissions from the individual by requiring them to fit new furnaces. It also gave the government the power to tighten control on the smoke control areas, by monitoring the sale of unauthorised fuels.

To keep up with modern emissions requirements, the 1993 Clean Air Act consolidated the previous two acts and their amendments. New additions to this act included a requirement for all new industrial furnaces to be ‘smokeless’. Also, chimney height regulations came into effect, where tall chimneys were ordered to be lowered to allow adequate dispersal of pollutant emissions. Moreover, further information became available to the public regarding how to comply with the new rulings and make better choices to improve air quality. 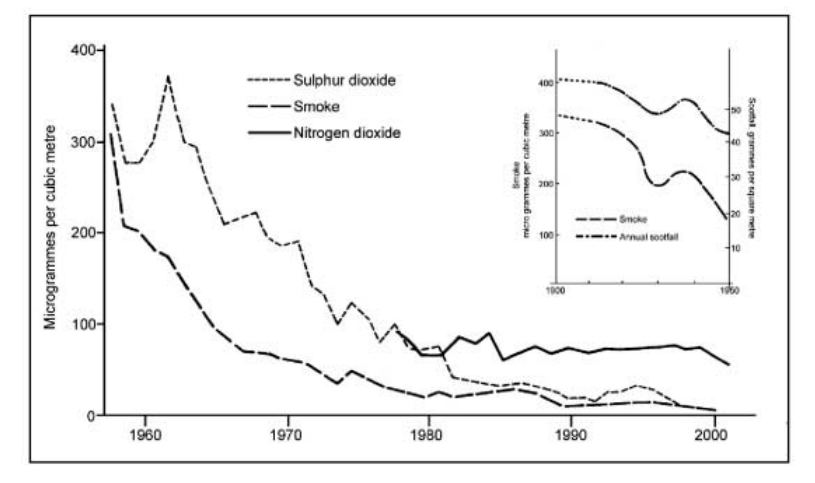 Initiatives and Policies in London and the rest of the UK

During the industrialisation of the 19th century, London became known for being extremely polluted, perhaps not on the scale of other cities in developing nations, but still below the World Health Organisation’s recommended standard for air quality. The Mayor’s Office of London released data suggesting that the poor air quality in the capital costs in between £1.4 billion and £3.7 billion and that 438 schools are in areas where the air quality breaches legal levels.

To combat this, the Mayor’s Office has introduced schemes to increase the air quality for the city's growing population. For example, by introducing a congestion charge into central London, it resulted in 60,000 fewer car movements per day, equating to 30% fewer cars on the road and reduced congestion. The congestion charge acts by charging individuals £11.50 per day to drive within the charging zone between 7 am and 6 pm on weekdays. Another London-based measure is the Toxicity Charge (T-charge), a £10 charge on older, more polluting vehicles, made in addition to the congestion charge.  And finally, to promote alternative methods of sustainable travel, the Mayor’s Office have spent £300 million on retrofitting thousands of buses with non-diesel engines and put them on the capitals most polluted routes, called Low Emission Bus Zones. These 12 Low Emission Bus Zones are expected to reduce nitrogen oxides by 84%. In the rest of the UK, various government schemes are in place to enable local authorities to work together to improve air quality. An example of this is outlined in the ‘Air Quality and Climate Change: Integrating Policy Within Local Authorities’ by Environmental Protection UK. This lists schemes and ideas for local communities to help improve their air quality. Examples include using alternative fuels, having low emission zones, travel plans, car clubs and improving energy efficiency in domestic and commercial settings.

ProAire and Plan Verde in Mexico

Following Mexico’s economic boom in the 1980s and 1990s, pollutant emissions sharply increased from the rise in transport and factories, with the 3 million cars on the road contributing to the largest proportion of the pollution. This problem is further exacerbated by the fact that Mexico City lies within the Basin of Mexico; due to weak anti-cyclonic winds in the Basin, air pollution cannot usually be dispersed outside of the basin, thus enclosing the Mexico City area in polluting smog. This helped garner Mexico City the title of the world’s most polluted city.

To improve the situation, Mexico adopted the Management Programme to Improve Air Quality (Proaire) in the late 1990s. This was a group of social policies that helped cut the number of cars on the road, improve the public transport system and generally limit the number of greenhouse gases and harmful pollutants from entering the atmosphere.  This scheme helped drop the AQI rating of 300 in the 1980s to average just less than 150 AQI within two decades. It also reduced the amount of ozone in the atmosphere from 500 parts per billion (ppb) to 150 ppb, showing a 70% decrease in the same time.

In 2008, further clean air initiatives were developed in the form of Mexico City’s Green Plan, Plan Verde. It worked with the original Proaire scheme and adapted it to promote sustainability and further reduce emissions. It emphasises local action and reintroduced the past ideas of ‘Hoy No Circula’ (Today don’t drive) and ‘Muevete en Bici’ (Get on your bike) campaigns.

In the 1980’s, Mexico City spent the majority of the year on high alert, having particulate concentrations above the recommended amount for human health. In the past few years, a high alert has only been issued a few times a year. Figure 4: The green house gas emissions of Mexico from 1990 to 2014; source: Climate Watch

India has become highly industrialised in the last few decades, with the GDP increasing by 2.5 times in the past 20 years. Vehicular pollution has increased by 8 times, and industrial pollution is now 4 times the amount it was 20 years ago.

This pollution doesn’t just come from traffic and industry; a sizable proportion of pollution from India is from intermittent sources, for example the burning of biomass, most commonly wood, used by 75% of households as a main source of fuel. ‘Slash and burn’ agricultural techniques occur annually in the fields north of New Delhi, the smoke from which is often blown into the capital and beyond. Even the traditional Indian burial service contributes to poor air quality, as remains are burnt outside, further releasing pollutants.

New Delhi has attempted to mitigate the effects of the huge amounts of pollution in the city, one of these schemes is the alternate day traffic system. In this scheme cars with odd and even number plates were only allowed on the roads of the city on alternate days. According to the New Delhi government, pollution fell by about a quarter in the two-week trial period, and this helped ease the congested traffic. There was also a large amount of opposition to this, about 90%, but as the two-week period came to a close the majority of those polled expressed support for the scheme. The resulting lack of congestion also allowed the public transport system to be more effective, allowing the buses and trams to move much faster than normal.

Furthermore, New Delhi has instigated a Graded Response Action Plan (GRAP) that direct the local government, law enforcement and public what to do when the air quality declines to a certain level. The Delhi Pollution Control Committee can stop construction and shut down power plants. The transport department can reintroduce their odd/even scheme, increase public transport service and assign heavy fines to polluting vehicles. The DPCC have even created an app, phone number and email address for the public to lodge complaints about individuals who are contributing to the pollution problem. 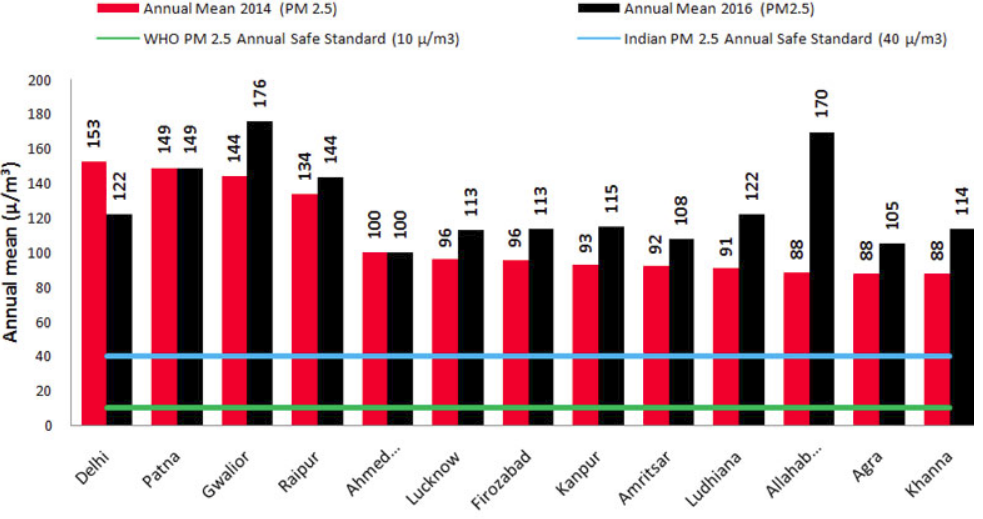 Figure 5: The change in annual concentrations of PM2.5 in different Indian cities between 2014 and 2016; source: World Health Organisation

This was directly applied to Beijing following the effectiveness of their plan to improve air quality in preparation for the 2008 Beijing Olympics. This involved suspending factories and coal-fuelled power stations from production and restricted over 2 million vehicles from going on the roads. Following a 1998 study by WHO on the 10 most polluted cities in the world, China had 7 of these cities.

Facing strong public pressure, China’s government implemented its Action Plan on Prevention & Control of Air Pollution in 2013. In the plan, the government pledged to slash coal consumption from around 67% of the nation’s total energy use in 2012 to 65% by 2017. Further plans aim to reduce China’s particulate matter (2.5) by 10% from 2012 to 2017, with Beijing aiming for a 25% reduction by then.

As of early 2018, Beijing’s air quality has vastly improved, reducing particulate matter (2.5) from 89 to 58 micrograms/m2, this showing a 30% decrease. Moreover, it also had ‘excellent’ (less than 50 AQI) air quality 28 more times than the previous year.