Ukraine is an example of a country with energy at the heart of strategic and foreign policy. The transformation of the country’s energy landscape is inextricably linked to its political history as well as current ongoing geopolitical developments.

Energy trading relations between Ukraine and Russia are characterised by Ukraine’s dependency on Russian imports (and Ukraine’s desire to reduce this dependency) as well as the importance of Ukraine as transit country for Russian exports to Europe: Russia is the main EU supplier for crude oil, natural gas and solid fuels. Russia’s leading position as fuel supplier is particularly marked in the case of gas: In 2015,  37% of EU natural gas imports were from Russia. About half of these imports come through pipelines through Ukraine. On the other hand gas exports to Europe accounted for 81% of all Russian gas exports.

[PLEASE NOTE - IF THIS ENERGY INSIGHT DOES NOT APPEAR IN FULL, PLEASE DOWNLOAD THE PDF ATTACHED TO THIS RECORD] 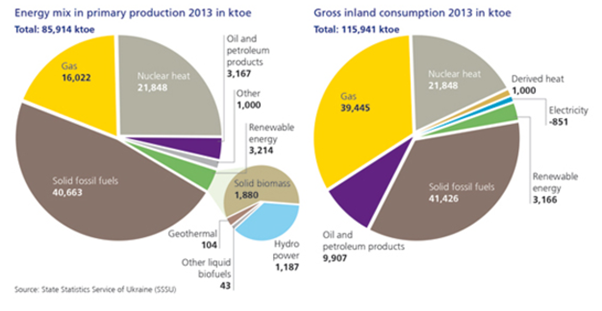 Ukraine has 0.6 trillion cubic meters of natural gas reserves, representing 0.3% of global resources, (UK: 0.1%; BP Stat Rev 2017). Natural gas production in Ukraine decreased by one-third from 28 bcm in 1990 to 19 bcm in 2014 but has stabilised at around 20bcm in 2015 and 2016. The delayed development and reduction of natural gas can be attributed to the ineffective market mechanism and the unfavourable investment climate in Ukraine. Gas accounts for 89% of Ukraine’s total hydrocarbons production (oil: 7.9%, gas condensate: 3.1%). 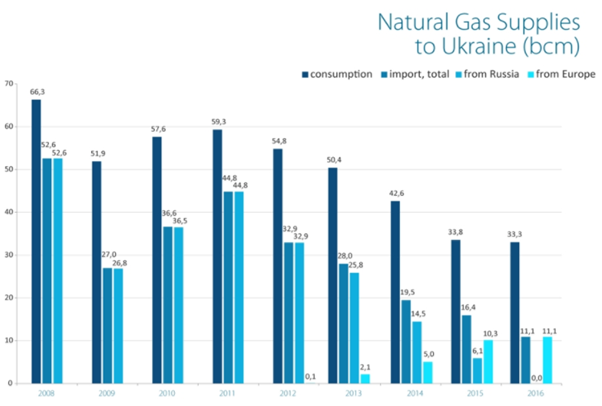 Figure 2: Gas consumption and imports to Ukraine from 2008-2016; source: Naftogaz

Ukraine has significant coal reserves (11353 mt of proved reserves at the end of 2016, BP Stat Rev 2017) and coal has dominated primary energy production before 2014. However a significant part of those reserves is located in the eastern part of the country in regions, which are now only partially under control of the Government. As a consequence coal production has decreased from 36.6 mtoe in 2013 to 17.1 mtoe in 2016 (2015: 16.4 mtoe) (BP Stat Rev 2017).  In March 2017 Ukraine imposed a cargo blockade to the breakaway eastern provinces. Furthermore the Government wants to reduce coal imports from Russia.

Gross electricity production was 164TWh in 2015 (2014: 183TWh, EuroStat). Losses in transmission and distribution networks are estimated to be as high as 35TWh in 2015. Due to decreased demand and problems of coal supply (see above), nuclear has become the main energy source for electricity generation, with 54% of electricity generated by nuclear plants in 2015 and a share of 60% expected by government.

To increase energy security and self sufficiency the country aims to increase domestic production from fossil and renewable resources as well as to deepen trading relations with the EU.

• Natural Gas: The government has set a goal to increase domestic gas production to 27bcm by 2020.
• Renewables: In 2014 the Ukraine government adopted a policy, the National Renewable Energy Action Plan (NREAP), which declares the goal to increase the share of renewable energy in its total energy consumption to 13% by 2030 up from 3% in 2013.

The EU and Ukraine have signed an association agreement in 2014 to deepen economic and political links. Its complete entry into force was delayed due to several reasons among them a Dutch referendum rejecting it in 2016. The agreement has since been modified and was accepted by the Dutch parliament in May 2017. Finally it was adopted by the European Council on behalf of the European Union on 12 July 2017.
The EU supports liberalisation efforts, modernisation of infrastructure and integrating Ukraine into the European energy market via initiatives of the European Energy Community and the European Bank for Reconstruction and Development (EBRD), which is the largest financial investor in Ukraine at the moment.
Ukraine is a member of the European Energy Community since 2011 and as such has to comply with some of the European energy legislation, in particular the third energy package. Recent reforms of gas and electricity markets (see below) as well as legislation on energy performance of buildings aim to transpose EU Directives into Ukrainian law. They are also aligned with the government’s wider efforts to attract more foreign investment by increasing transparency and corporate governance, in particular in state-owned companies which could eventually be privatised. To the country’s appeal to investors the government will also have to step up efforts to fight corruption, a deeply rooted and widespread problem of the country’s political and economic system.
The G7 nations have declared continued support to Ukraine’s independence and territorial integrity but also to institutional and administrative reforms in several critical sectors, among them energy. There are several cooperation projects backing Ukraine’s efforts to reform and liberalise its energy system (progress report 2016).

A gas market reform entered into force in 2015 with the goal to reduce dependence on Russian imports (they have already been reduced significantly) and to open the market for foreign businesses.  Since April 2017 foreign traders are allowed to bid for contracts to supply the national pipeline operator with gas. An electronic procurement platform (ProZorro) has replaced paper based tenders. Trafigura, one of the world’s largest energy traders, and Engie have entered the Ukrainian gas wholesale market.

While the reform transposes the majority of provisions of the Third Energy Package into Ukrainian law, the EU has declared that further steps are necessary to achieve compliance with the directive.

The Ukrainian Parliament adopted a reform package, the Electricity Market Law, in April 2017 and signed by President Poroshenko in June 2017. Similar to the gas market reform, the law aims to establish a new market framework compatible with the EU Third Energy Package and thus includes TSO unbundling, DSO unbundling, deregulation, and increasing competition. While the EU points out that full compliance has not yet been achieved, progress has been made in some specific areas, for example electronic auctioning for both, exports and imports, has started in May 2017, allocating capacity on all borders on a daily, monthly and yearly basis. The new law envisions abandonment of the current single-buyer-market and introduction of bilateral trading by 2019 along with balancing, intraday and day-ahead markets.

Some recent developments in the Ukraine electricity markets suggest increased interest and activity by foreign companies and investors:
• Chinese firms plan to build a 1GW solar farm in the (1000 square mile) exclusion zone around the decommissioned Chernobyl nuclear plant
• Engie, one of France’s biggest utilities, considers as well to invest in a £1bn solar plant on Chernobyl nuclear reactor premises.
• EuroCape New Energy, a European onshore wind developer, plans to build a 500MW onshore wind farm in eastern Ukraine, close to Crimea.
In 2015 the Ukrainian government adopted a decree with the aim to connect the Ukrainian electricity grid to the synchronous grid of continental Europe by 2019. This opens the possibility of power exports to Europe (and will make investment into Ukrainian power generation more attractive).
The conflict between Ukraine and Russia is about the transit fees Russia has to pay for using the pipelines running through the country to export gas to Europe and the price Ukraine pays for gas imports from Russia.

With an energy intensity that is more than double that of the EU, Ukraine is one of the most energy-intensive economies in the world. In 2015, energy subsidies cost 7%-8% of GDP, creating a significant financial burden.

There is a vast potential for energy efficiency gains. Domestic and industrial energy efficiency are very low and they need to improve significantly and could play a substantial role in increasing energy self sufficiency. In particular thermal power plants' efficiency should be increased. The IEA emphasises how energy efficiency improvements in residential heat could increase Ukraine’s energy security and reduce pressure on public budgets. One factor hindering energy efficiency improvements are low energy prices: Electricity prices are much lower than the cheapest prices in the EU-28 (which are in Romania).
Several development organisations such as the World Bank, EBRD and German GIZ support the country’s towards increased energy efficiency through technical and regulatory assistance and funding.
In 2015, the Ukrainian government adopted an Energy Efficiency Action Plan (EEAP) for 2020 setting an overall national indicative energy savings target of 9% of final energy consumption (6,5 mtoe) till 2020. However the EU points out that Ukraine is currently not complying with several provisions of EU legislation regarding energy labelling, metering and energy performance of buildings.