In this Energy Insight:
- What is fuel poverty?
- Who is affected and what are the impacts?
- How are we tackling fuel poverty?

How is fuel poverty defined?

Fuel poverty is a devolved issue, with each nation in the UK having its own policies and metrics for measurement. See below for more details on this.

Anyone can be affected by fuel poverty, but it commonly impacts on single parent households, and people who are unemployed or have a low income. Living in a cold, damp home, or struggling to afford energy for heating and cooking can be extremely stressful, and often leads to negative health outcomes, such as exacerbation of asthma, heart conditions and respiratory issues.
England
England previously used the low income high cost (LIHC) indicator to determine fuel poverty. This considers a household to be fuel poor if:
As of February 2021, England has switched to use a new indicator, as set out in the Sustainable Warmth strategy. The low income low energy efficiency (LILEE) indicator considers a household to be fuel poor if:
See the Sustainable Warmth strategy for an explanation of the reasoning behind the switching of metrics.

Who is affected by fuel poverty?

There are over 4mn households in the UK affected by fuel poverty. While it is difficult to compare directly between nations, due to different population sizes and definitions, the data below provide an overview of the situation.
Source: Annual Fuel Poverty Statistics in England, 2021 (2019 data), Dept. for BEIS
Households in fuel poverty tend to be ones in older dwellings that are poorly insulated. In England, 26.8% of households in the private rented sector were in fuel poverty, compared with 8.2% in owner occupied properties. Single parent households are the most likely to be fuel poor (28%); for comparison, just 6% of couple under 60 households are fuel poor.

Each nation in the UK has its own fuel poverty targets:
England
The main target is to ensure that as many fuel poor homes as is reasonably practicable achieve a minimum energy efficiency rating of Band C of the Energy Performance Certificate (EPC), by 2030. The EPC rating is a measure of current and potential energy costs, alongside the performance of energy related features in the home, such as the walls, roof, windows and heating system. In the Clean Growth Strategy published in October 2017, the Government pledged around £3.6 billion of investment to upgrade around a million homes through the Energy Company Obligation (ECO) (see below). 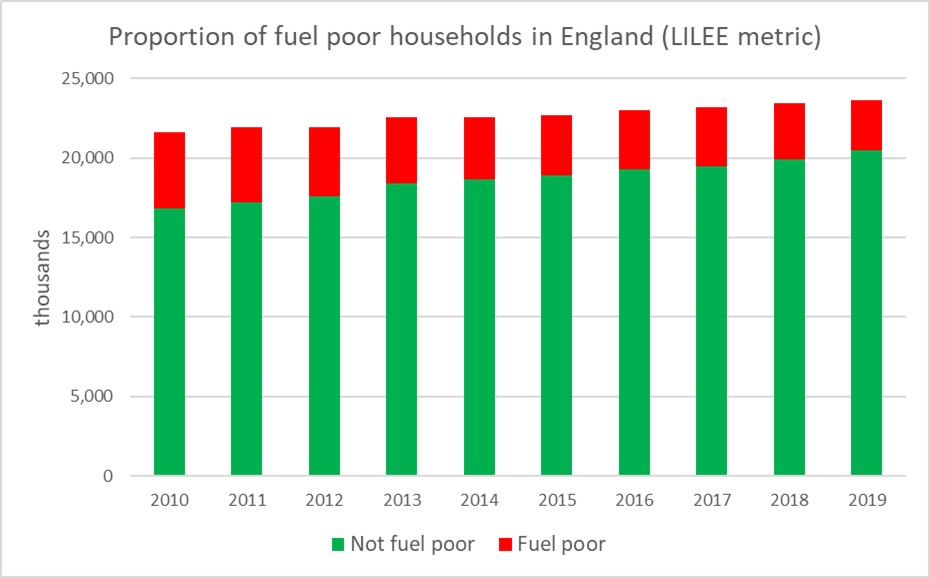 Scotland
Among the planned policies to achieve the targets are investment in making warmer, greener and more efficient homes, a review of the scheme eligibility for Warmer Homes Scotland or establishment of a public energy company to contribute to tackling fuel poverty and supporting economic development.

Wales
Wales’s most recent fuel poverty strategy was published in 2021 and aims to eradicate fuel poverty, as far as is practical, in all households by 2035. The key policies aimed at contributing to the delivery of this strategy include the Nest and Arbed schemes which focus on increasing the energy efficiency of a property.

Northern Ireland
Northern Ireland’s ‘Warmer Healthier Homes - a new Fuel Poverty Strategy for Northern Ireland’ was published in 2011. A primary aim of this strategy was to target available resources on those vulnerable households who are most in need of help, with the eradication of fuel poverty as a core goal of the NI Government’s efforts. Policies pledged in the strategy include funding improvement of the energy efficiency of the housing stock or launching a boiler replacement scheme.

Which policy bodies are responsible for tackling fuel poverty?

What are the main strategies and policies designed to combat fuel poverty?

The UK Government is committed to delivering state-level policies tackling the problem of fuel poverty. The main measures include:

The impact of domestic energy bills on fuel poverty 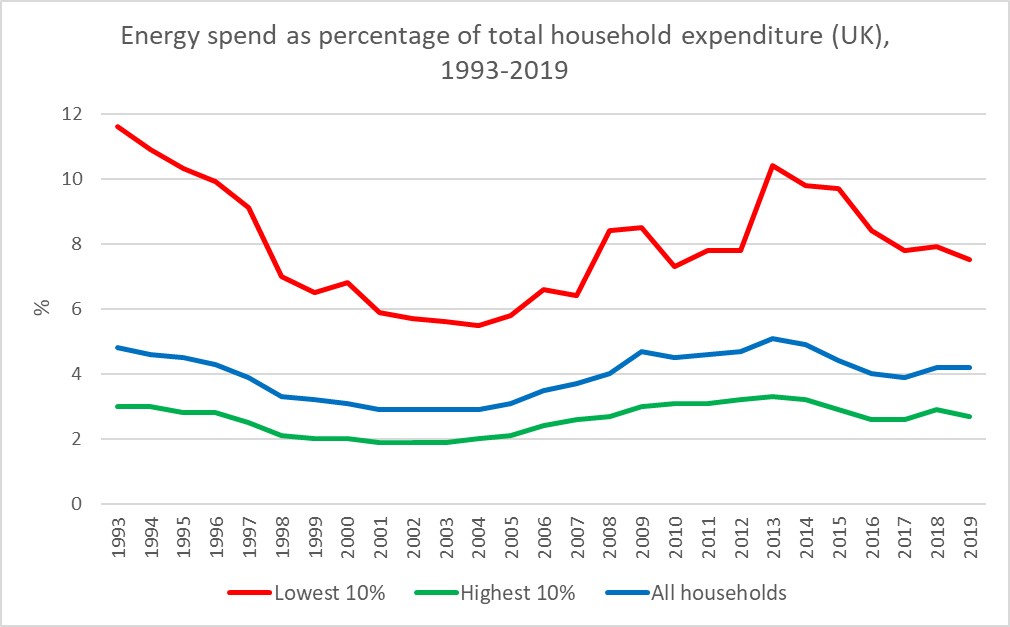 Energy prices have a big impact on fuel poverty, and there are concerns that energy companies have boosted profits by placing customers on expensive variable tariffs by default. The ‘variable’ part of the tariff means that the price per kWh can be changed any time (although customers do have to be noted in advance). 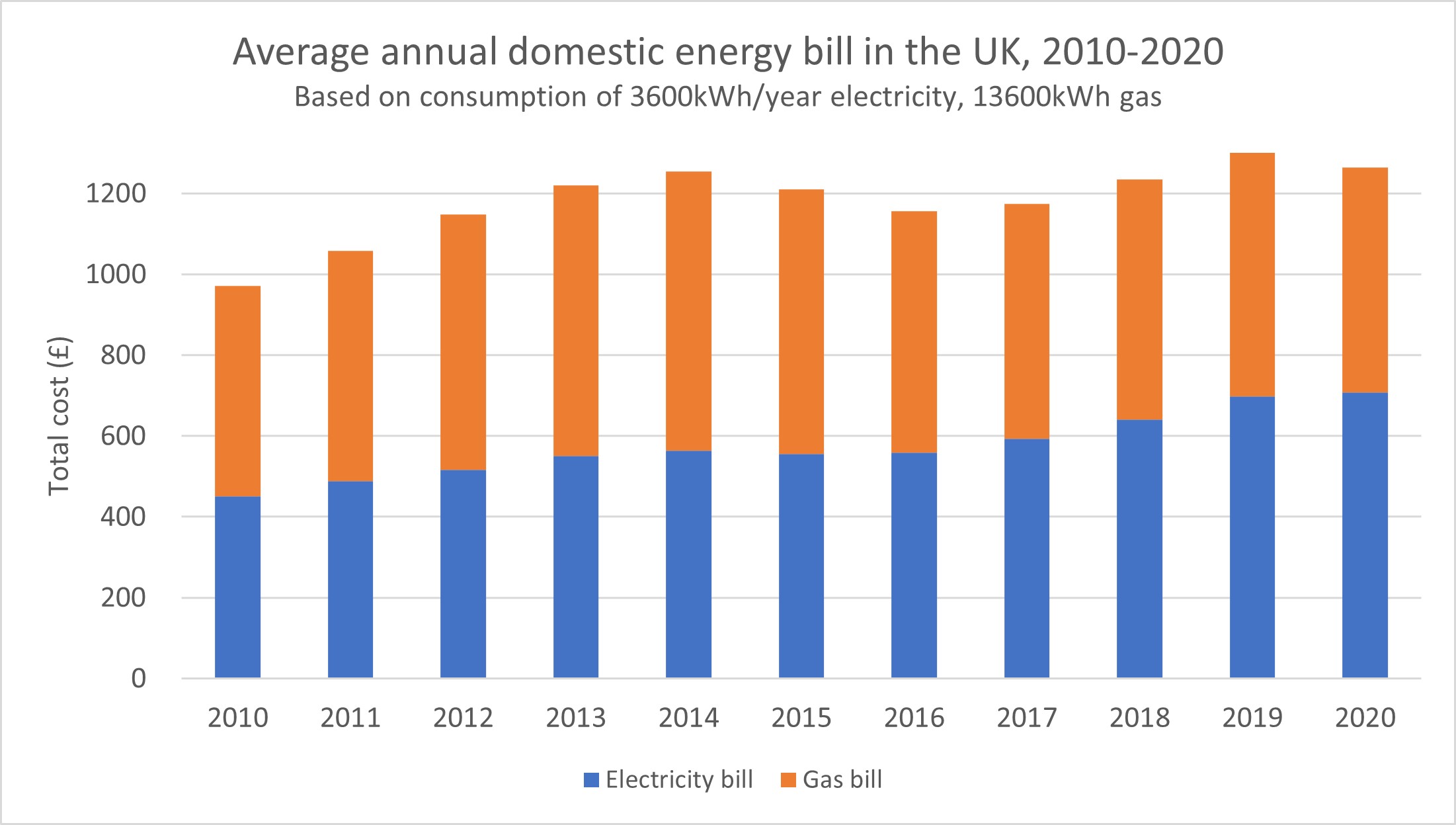 Source: Annual domestic energy bills, Dept. for BEIS, July 2021
In 2017, Ofgem estimated that around 13 million customers are on standard variable tariffs in Britain. In a survey by the CMA, 56% of respondents had never switched their supplier; the survey concluded that in 2015, domestic energy customers as a whole paid £2bn more than they would have in a competitive retail market. The CMA identified significant obstacles for particular customer groups, especially customers on prepayment contracts, which include poorer households, to engage in the market and thus benefit from competition.
Ofgem have been working to enhance competition in the household electricity and gas market. They encourage energy consumers to regularly compare available tariffs and launched an energy supplier comparison site in 2017 which helps consumers to make informed decisions about switching suppliers or tariffs in order to save money. In July 2021, the Government announced a trial for automatic switching for customers on expensive default energy tariffs.

One area of success has been the diversification of the domestic energy market. In 2011, it was completely dominated the ‘big six’ energy companies - British Gas, SSE, E.ON, nPower, Scottish Power and EDF. In the decade since, this dominance has been shattered. 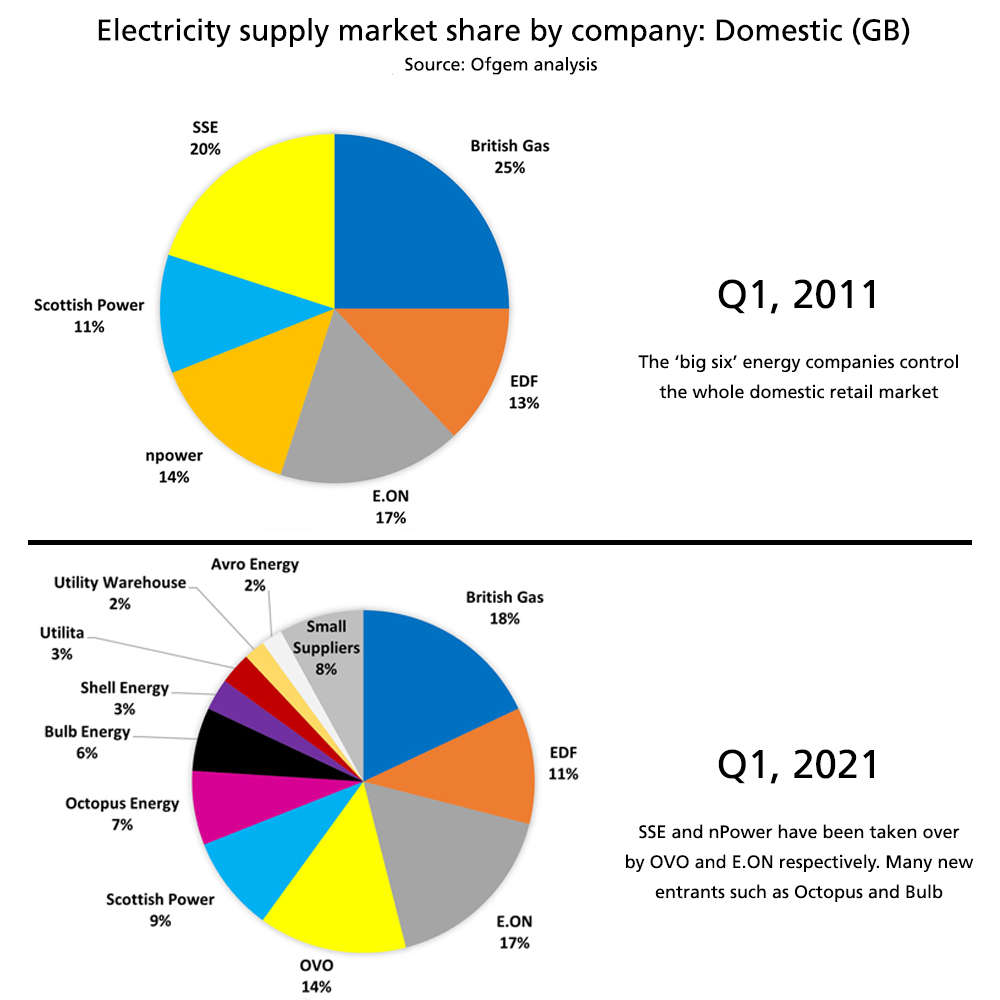 Source: Ofgem retail market indicators, 2021
Reports about potentially high profits of energy companies have gained a lot of media attention in recent years. In 2016, a study by PWC for Energy UK expected costs and revenues of big electricity and gas suppliers in the UK suggested profit margins of up to 28% per dual fuel bill, instead of the 4% claimed by the industry and used by Ofgem. In July 2017, Citizens’ Advice estimated that network companies such National Grid would be making unjustified profits of £7.5bn over a period of 8 years, which would correspond to a 19% profit margin.
The Competition and Markets Authority (CMA) concluded in 2016 that Ofgem lacked the requisite information to assess generation and retail profitability. It identified a lack of financial transparency due to the complexity of big energy companies’ operations and their reporting practices as well as differing accounting regimes between companies, which had been recognised before by parliamentary committees, consumer groups and Ofgem. Consequently, the CMA proposed a reform package for the financial reporting requirements for energy suppliers.

How effective have fuel poverty policies been?

Tracking changes in fuel poverty across the UK is challenging, due to different and changing definitions of what fuel poverty actually is. Based on the LILEE metric, England has seen the number of fuel poor households fall in all but one year since 2010. The median fuel poverty gap (the difference in pounds between the required energy costs for each fuel poor household and the nearest fuel poverty threshold) has also fallen.
Energy Institute members, i.e. energy professionals who live and work in the UK, continue to rank policies around fuel poverty as the least effective among energy polices in the UK. This is according to the results of the annual Energy Barometer surveys from 2016 - 2021.
According to the Institute for Public Policy Research’s report, based on current rates of the installation of energy efficiency measures, the government will miss a key fuel poverty target by around 6 decades, as elevating all fuel-poor households to EPC band C will not be achieved until 2091 at the very earliest.