A team of researchers at University of Illinois Chicago (UIC) has discovered a way to convert 100% of CO2 captured from industrial exhaust into ethylene, a key building block for plastic products. Meanwhile, at McGill University in Canada, scientists have identified a potential method for producing hydrogen from the oceans.

While researchers have been exploring the possibility of converting CO2 to ethylene for more than a decade, the UIC team, led by Dr Meenesh Singh, claims its approach is the first to achieve nearly 100% utilisation of CO2 to produce hydrocarbons. The system uses electrolysis to transform captured CO2 gas into high purity ethylene, with other carbon-based fuels and oxygen as byproducts. The findings have been published in Cell Reports Physical Science.

The process can convert up to 6 tonnes of CO2 into 1 tonne of ethylene, recycling almost all the CO2 captured. Because the system runs on electricity, the use of renewable energy can make the process carbon negative, says the research team.

According to Singh, his team’s approach surpasses the net zero carbon goal of other carbon capture and conversion technologies by actually reducing the total CO2 output from industry. ‘It’s a net negative,’ he says. ‘For every 1 tonne of ethylene produced, you’re taking 6 tonnes of CO2 from point sources that otherwise would be released to the atmosphere.’

Previous attempts at converting CO2 into ethylene have relied on reactors that produce ethylene within the source CO2 emission stream. In these cases, as little as 10% of CO2 emissions typically converts to ethylene. The ethylene must later be separated from the CO2 in an energy-intensive process often involving fossil fuels.

In UIC’s approach, an electric current is passed through a cell, half of which is filled with captured CO2, the other half with a water-based solution. An electrified catalyst draws charged hydrogen atoms from the water molecules into the other half of the unit separated by a membrane, where they combine with charged carbon atoms from the CO2 molecules to form ethylene.

Among manufactured chemicals worldwide, ethylene ranks third for carbon emissions after ammonia and cement. Ethylene is used not only to create plastic products for the packaging, agricultural and automotive industries, but also to produce chemicals used in antifreeze and medical sterilisers. It is usually made in a process called steam cracking that requires enormous amounts of heat. Cracking generates about 1.5 tonnes of carbon emissions per tonne of ethylene created. On average, manufacturers produce around 160mn t/y of ethylene each year, which results in more than 260mn tonnes of CO2 worldwide, according to EcoCatalytic, as reported in C&EN.

In addition to ethylene, the UIC scientists were able to produce other carbon-rich products useful to industry with their electrolysis approach. They also achieved a very high solar energy conversion efficiency, converting 10% of energy from the solar panels directly to carbon product output. This is well above the state-of-the-art standard of 2%. For all the ethylene they produced, the solar energy conversion efficiency was around 4%, approximately the same rate as photosynthesis.

In her research on bone tissue engineering, Dr Marta Cerruti has worked for years with graphene, a single sheet of carbon atoms with electrical conductivity and the ability to support tremendous weight. Now, in her quest to improve graphene’s qualities, she has found a possible solution to one of the challenges of producing hydrogen from seawater.

Cerruti, a professor of materials engineering, explains that while graphene is structurally sound, ‘one sheet of atoms is not something you can easily work with’. In fact, piling the sheets up results in, basically, pencil lead.

Searching for a way to make an easy-to-handle structure, Cerruti’s PhD student Yiwen Chen combined graphene with oxygen in a suspension with water to create reduced graphene oxide (GO), a porous, 3D, electrically conductive scaffold. Cerruti suggested a further modification, with GO flakes stacked on the pore walls, ‘which allowed us to exploit another interesting property of GO – it creates a membrane that allows water through but no other molecules’.

When she canvassed her team for suggestions on how best to test the new scaffold, post-doctoral fellow Gabriele Capilli suggested seawater electrolysis and the team found that the new GO ‘selective scaffold’ had the potential to improve the process of producing hydrogen from the ocean. The research findings have been published in the journal ACS Nano.

In conventional electrolysis, chloride ions in seawater penetrate the electrode and interact with the catalyst, creating hypochlorite ions, an unwanted byproduct that poisons the catalyst, Cerruti explains. Using X-ray phase contrast imaging at Canadian Light Source (CLS) at the University of Saskatchewan, Chen confirmed the GO scaffold had the right structure, with closed GO pores enclosing cobalt oxide nanoparticles as the catalyst. Electrochemical tests performed in the laboratory confirmed the scaffold worked as expected to block unwanted ions.

The next challenge for the scientists will be scaling up to mass produce the GO membrane. 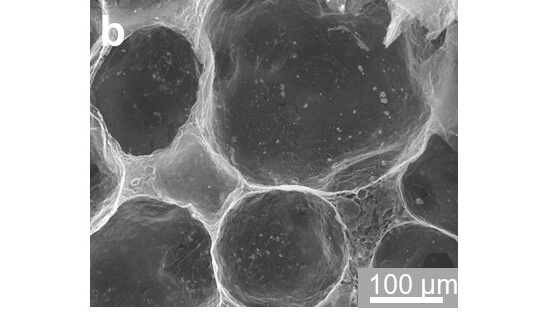