Europe’s push to end reliance on Russian gas opens up new possibilities for suppliers from the Caspian region. Here, Tim Crawford reports on the ambitions of suppliers in Azerbaijan and Turkmenistan, as well as European plans to expand imports of LNG.

Prospects for new natural gas development in the Caspian Sea region have improved substantially since Russia began its war in Ukraine in late February. For much of the past two decades, European Union (EU) energy policy has focused on broadening access to alternative sources of gas supply to Russia, to improve its energy security, rather than actively working to reduce the volume of Russian imports. But Brussels’ aim is now to phase out Russian supply as quickly as possible, with the European Commission targeting a reduction of as much as two-thirds within the next year.

Irrespective of whether such an ambitious goal is realistic, it is clear that Russia’s share of the European gas market, which currently stands at around 40%, will shrink over the coming years, assuming there is no dramatic rapprochement in relations between Moscow and the West. And even the most ambitious EU projections show that gas demand will decline at a slower rate, opening up new opportunities for other natural gas suppliers, including Caspian producers.

Expanding the Southern Corridor
Azerbaijan established itself as a gas supplier to south Europe at the end of 2020, following the launch of the Trans-Adriatic Pipeline (TAP), which represents the final leg of the Southern Gas Corridor (SGC). The pipeline’s capacity is 10bn m3/y, of which 8bn m3 has been committed by Italy and 1bn m3 each by Bulgaria and Greece. This gas is sourced from the giant Shakh Deniz field off Azerbaijan’s coast.

A market test was concluded in July last year, during which the TAP consortium invited binding bids from buyers for an expansion of the pipeline’s capacity to 14.4bn m3, 17.1bn m3, or potentially as high as 20bn m3/y.

That test failed to attract any bids. But another market test was also launched last summer, and a public consultation on a draft proposal for the expansion took place between 18 January and 18 March this year. Conditions in the European gas market, and the priorities of European leaders, have changed greatly since the last test’s failure. Front-month prices at European gas hubs are up 10-fold, and Bulgaria, Greece and Italy are all working to end Russian gas imports, as are a number of their neighbours.

Brussels’ aim is now to phase out Russian supply as quickly as possible, with the European Commission targeting a reduction of as much as two-thirds within the next year.

The TAP consortium is currently analysing market feedback and, while the binding phase of the new test is officially due to take place in July 2023, the group says it could occur in 2022, depending on this feedback.

On the supply side, extra gas could come from Shakh Deniz, where BP, Azerbaijan’s SOCAR and the field’s other developers have proposed a third stage of development, which would target deeper layers. Other contributors could include TotalEnergies’ Absheron project. While Absheron's first 1.5bn m3/y stage, on track to start up later this year, is set to serve Azerbaijan’s domestic gas needs, a second has been proposed that would take output up to 5 bn m3/y. And this extra gas would be available for export.

BP is continuing to explore Azeri waters in the Caspian, and any new discoveries could also be hooked up to export gas to Europe. The UK major and SOCAR completed an ultradeep well at the Shafag-Asiman block in the Azeri Caspian last year. SOCAR reported a gas and condensate discovery at the well, although BP did not comment on the result. The pair also drilled a well at the Shallow Water Absheron Peninsula (SWAP) area last year, although the result was not revealed, and they began work on a second earlier this month. Additional wells are planned.

Enter Turkmenistan
Beyond Azerbaijan, additional gas supply for Europe could also come from Turkmenistan. The Central Asian state boasts the fourth largest gas reserves in the world, estimated by BP at 13.6tn m3 proven. But it has been unable to find a large market for this gas beyond China. The government in Ashgabat has long aspired to gain a slice of the European gas market by building a trans-Caspian pipeline that would link with the SGC system in Azerbaijan.

Opposition from Caspian Sea neighbour Russia, as well as commercial obstacles, have thus far thwarted the project. However, Azerbaijan and Turkmenistan have since scaled down their ambition for the pipeline to a 78-km link that would dispatch 5bn m3/y of Turkmen gas from the offshore Magtymguly field to Azerbaijan. Turkmenistan also has the capacity to double land gas swaps with Iran and Azerbaijan to 4–6bn m3/y.

Iran and Iraqi Kurdistan are other, outlier options for extra gas for SGC. But substantial new infrastructure is necessary to make this possible, and Iran and the West would need to come to a rapprochement, through the reinstating of the 2015 Joint Comprehensive Plan of Action, in order for the necessary political agreements to be reached and the needed financing to become available. With talks between Washington and Tehran currently reported to be stalling, this is not assured.

Tempering expectations
While the fallout from Russia’s invasion of Ukraine certainly has lifted prospects for Caspian gas development, it is important not to overstate how much gas could be made available to Europe, or how quickly. Offshore Caspian projects have a history of falling behind schedule and suffering cost overruns, due to logistical issues, complex geology and difficult operating conditions.

A case in point is the super-giant Kashagan oil field off the coast of Kazakhstan, which was discovered in 2000 but took $55bn and another 16 years to bring into commercial flow, as the project was beset by perennial delays, operational setbacks, cost inflation and wrangling between investors and the government.

One problem in particular that has held up recent development has been a lack of drilling rigs in the landlocked sea. At Shafag-Asiman, for example, BP and SOCAR had initially hoped to drill their first well as early as 2016, but were unable to obtain a suitable rig until last year. 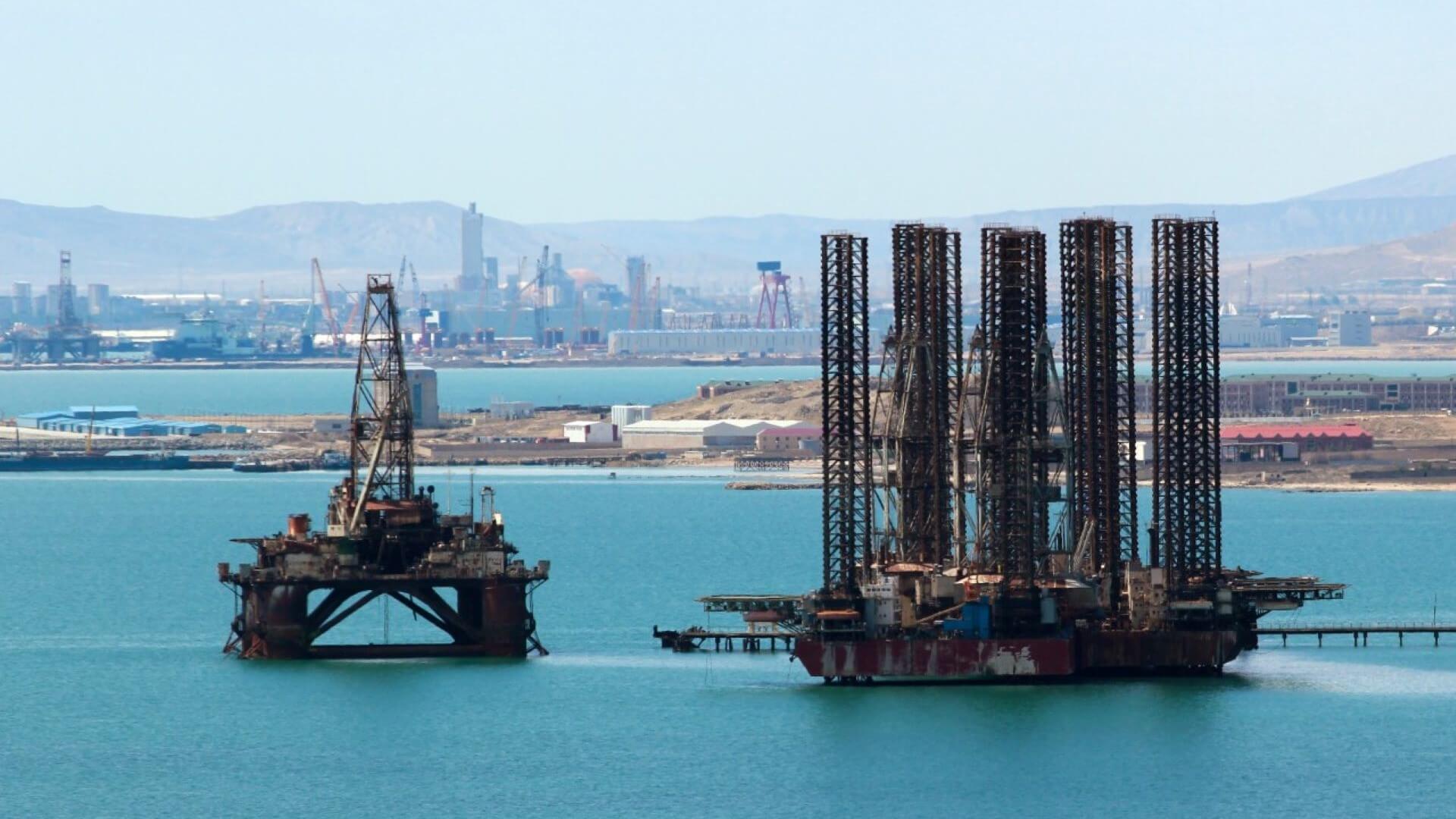 Furthermore, while Azerbaijan has enjoyed great success in enticing foreign investors to its upstream sector and reaching export contracts, the same cannot be said of Turkmenistan. The dealings of the country’s authoritarian and isolationist regime with its neighbours and investors over the years have been characterised by distrust and a lack of pragmatism.

In the case of the Trans-Caspian pipeline, there is no guarantee that Turkmenistan will be diplomatically flexible enough to reach an agreement with Azerbaijan on its implementation. And this is not to mention how Russia would react to the project making headway, especially in light of its current standoff with the West. Difficulties with Turkmenistan’s business climate have also been blamed for the country’s failure to capitalise on its offshore oil and gas resources in the same way Azerbaijan and Kazakhstan have.

Turkmenistan’s attention is also divided between the Trans-Caspian pipeline and two other pipeline projects that would carry more of its gas to China and open up the Indian and Pakistani markets. The first is the 30bn m3/y Line D of the Central Asia–China pipeline, which has been in limbo for years because of a lack of commitment from Beijing. The second is the decades-old Turkmenistan-Afghanistan-Pakistan-India (TAPI) pipeline, which has been held up by security concerns in Afghanistan and difficulties securing financing.

The ongoing dispute over the Caspian’s legal status has also hindered development of upstream and midstream projects. The heads of all five littoral states signed a landmark convention in 2019 to resolve this dispute, but Iran is yet to ratify it and little other progress on its implementation has taken place.

The lack of a resolution has held up several projects that lie in areas of the Caspian that are disputed by two or more littoral states, including the Dostluk field, contested by both Azerbaijan and Turkmenistan. The pair did reach an initial agreement on its development in January 2021, but there has been limited sign of any progress in negotiating further steps. And in any case, the unresolved status of the Caspian will make it harder for the two countries to attract outside investment, expertise and other support to take the project forward.

Competition
It is also important to note that while Russia’s receding market share in Europe does open up new possibilities for Caspian gas, other suppliers are also vying for increased sales to the continent. The market may well be very tight right now, but there are numerous import projects planned to help loosen it up in the coming years, even if doubts hang in some cases over where the extra gas can be sourced from.

In south-east Europe, Greece is building a second 5.5bn m3/y LNG terminal near Alexandroupolis and three more are proposed, with capacities of 5.5, 5.2 and 2.5bn m3/y, all tentatively due to start up in 2023. Italy has five projects underway to expand its LNG import capability and, if all of them are realised, they will add 20bn m3/y to its regasification capacity by the mid-2020s.

Meanwhile, Albania is looking to establish itself as an LNG importer by erecting a terminal in Vlora, with support from ExxonMobil. Then there is also the EastMed pipeline, which could carry as much as 20bn m3/y of gas extracted off the coasts of Israel and Cyprus.