Its launch may be more than a decade late, but the European Union’s (EU) first European Pressurised water Reactor (EPR) has finally started producing electricity for the Finnish national grid. Its strategic importance to Finland, as the country is preparing for NATO membership following Russia’s invasion of Ukraine, is hard to overstate. It will help Finland to wean itself off Russian energy imports, giving its government more latitude as it plots a future that views its giant neighbour as unreliable at best, and dangerous at worst.

The nuclear power plant is located on Finland’s Gulf of Bothnia west coast, far from the Russian border. Start-up of the Olkiluoto 3’s (OL3) reactor took place on 21 December 2021, after which the power output was gradually increased to 27% capacity, with the plant connected to the grid on 12 March with a power output of 103 MW.

Full capacity will be achieved by the end of July, when residential demand is low, preparing the plant for increased pressure during Finland’s frigid winter, when average temperatures in the capital Helsinki fall below freezing (in January and February) and far further in northern regions, such as Lapland.

TVO Senior Vice President Electricity Production Marjo Mustonen says: ‘OL3 is a significant addition to clean electricity production in Finland. At the same time, the need for the import of electricity will decrease to below half [previous levels].’

Sama Bilbao y León, World Nuclear Association Director General, agrees, saying: ‘Olkiluoto 3’s start-up will further reduce Finland’s use of fossil fuels and need for electricity imports, increasing its energy security and reducing its greenhouse gas emissions.’ The country now has five nuclear power plants, with a combined output capacity of 4,394 MW. Three of these plants are at Olkiluoto, and two on the Gulf of Finland, just over 100 km from the Russian border, at Loviisa. 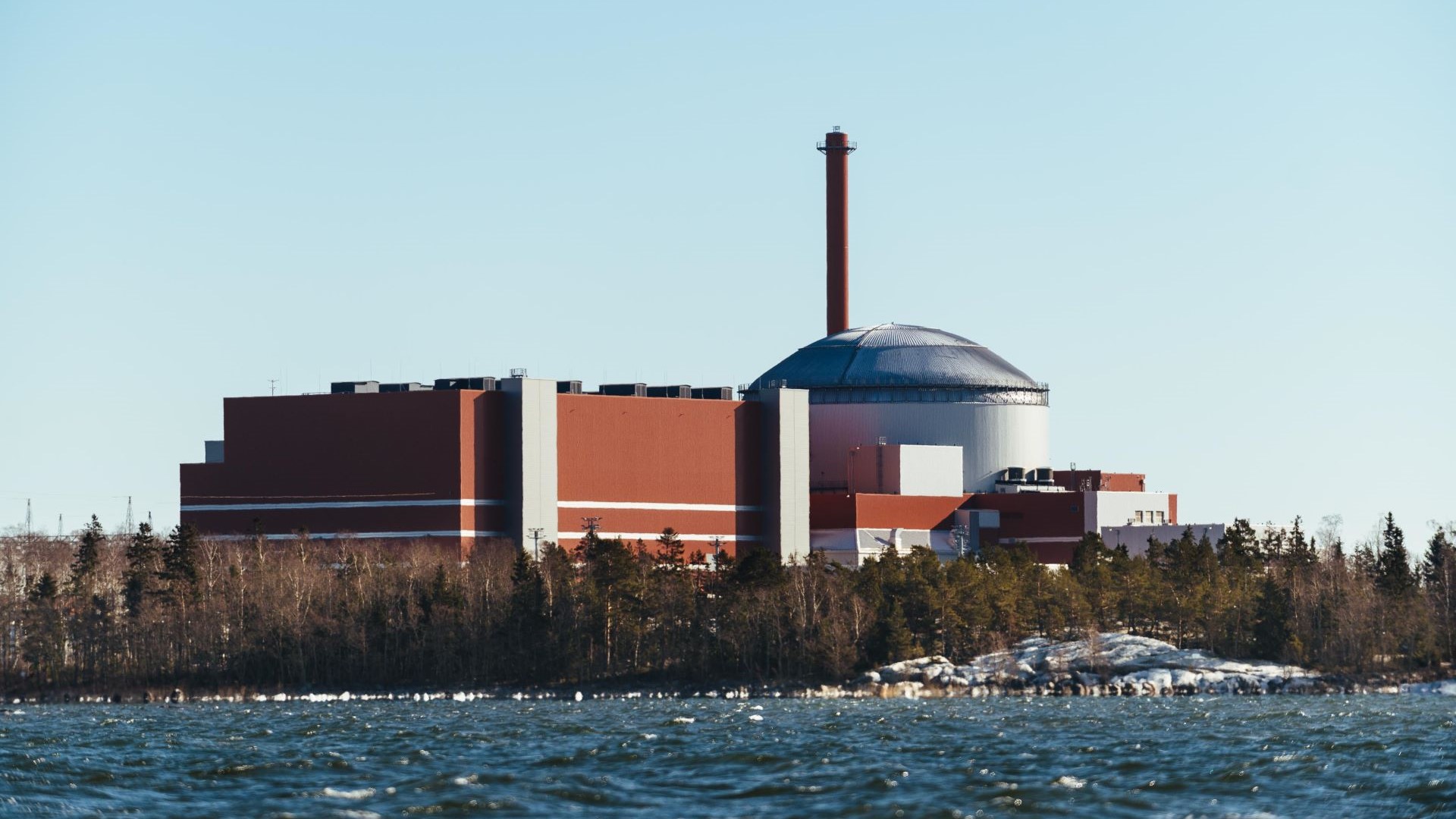 OL3 is the only working EPR in Europe – it has a generating capacity of 1,600 MW, with the potential to supply up to 14% of Finland's electricity needs
Photo: TVO

Ending reliance on Russia
Of key importance here is cutting Finland’s reliance on energy from Russia, with which it shares a 1,340 km border, now of major concern given Russia’s invasion of Ukraine.

Finland is not dependent on Russian supplies for natural gas. Since 2020 it has also been connected to the Baltics States’ gas network through the Balticconnector pipeline, and hence to the Klaipeda LNG terminal in Lithuania, through Estonia and Latvia. As a result, Gasgrid Finland CEO Olli Sipilä told Finnish public broadcaster YLE in an interview that, should Russia turn off Finland’s direct gas supply via the pipeline to Imatra, on the Russian border, Finland could still secure enough natural gas from other sources.

According to Statistics Finland, only 6% of overall Finnish energy consumption is delivered by natural gas. With 75% of Finland being forested, wood fuels account for 28% of total energy consumption (peat accounts for 3%), nuclear power 19%, coal 6%, and renewables 6%. Oil, however, is also important (21%) and Finland has remained a major importer of Russian oil – importing $3.7bn worth of mineral fuels, oils and distillation products during 2020.

However, at an EU heads of government meeting on 19 March, Finnish Prime Minister Sanna Marin accepted that, by importing Russian fossil fuels, her country was financing Russia’s invasion of Ukraine, saying it is important to ‘get rid of Russian fossil fuels as soon as possible’. Indeed, the Finnish newspaper Helsingin Sanomat reported in April that Finland may stop importing Russian crude by July.

Partly state-owned energy company Neste announced on 1 March that it will source crude oil for the country’s only refinery at Porvoo from non-Russian sources after July – all Russian spot purchases have ceased and current contracts lapse in July.

Managing nuclear waste
As ever with nuclear power, governments must take account of public opinion often wary about nuclear safety and waste management, and Finland is no exception.

But here again, concerns about Russia temper environmentalist worries about OL3. Anna Ikonen of EKOenergy, an international not-for-profit ecolabel for energy, part of the Finnish Association for Nature Conservation, says: ‘[Sentiment over the new plant] is more positive than negative in that OL3 adds to Finland’s energy self-sufficiency and reduces the need to import electricity. In that way it helps us cut Russian energy imports.’ She adds: ‘We expect it to work and operate successfully. There is no reason to have safety concerns as OL3 has been closely followed by Finnish media.’

Public concern has also been soothed by Finland managing all its own nuclear waste, rather than exporting it. That applies to all its current plants. All the Olkiluoto plants have access to onsite waste processing facilities and a special nuclear waste depository has been carved out of hard rock adjacent to Olkiluoto, which geologists have concluded is ‘migmatised, high-grade metamorphic mica gneisses, containing cordierite, sillimanite or garnet porphyroblasts’. Olkiluoto can also process and store spent fuel rods from Loviisa’s nuclear reactors.

Posiva Oy, a joint venture of TVO, Fortum Power and Heat Oy, will handle this work, drawing from a waste management fund that already has access to €3bn; although it will be five years before any spent OL3 fuel rods will be received. Posiva’s compensation and all (nuclear power plant) decommissioning costs have been factored into the OL3 electricity price.

‘Public opinion has not changed here due to security or other concerns,’ says Liisa Heinkinheimo, Deputy Director General, Nuclear Energy and Fuels Unit at Finland’s Ministry of Economic Affairs and Employment. ‘Nuclear power has historically had high acceptance ratings, which are growing due to climate change and the repository.’

Public concern has been soothed by Finland managing all its own nuclear waste, rather than exporting it – all the Olkiluoto plants have access to onsite waste processing facilities and a special nuclear waste depository has been carved out of hard rock adjacent to the site.

Twelve years late
However, acceptance has not been helped by delays to the construction of the Olkiluoto 3 unit, problems that are accepted by Heinkinheimo. ‘OL3 had an over-ambitious schedule,’ she says, noting that the 2009 deadline for completion and start-up was unrealistic, given the project was only approved by the Finnish parliament in 2002.

Tapani Virolainen, Deputy Director of the Finnish Radiation and Nuclear Safety Authority (STUK, Säteilyturvakeskus), responsible for overseeing the entire project from planning to construction and execution until start-up, notes: ‘OL3 suffered from first-of-a-kind issues as it was more complicated than earlier plants due to the incorporation of new design technology and safety features, for instance against internal and external hazards.’

The three parties in the consortium – comprising customer and operator TVO, STUK and supplier Areva-Siemens (now separate companies) – were building a Finnish plant for the first time since the 1970s, and, by constructing an EPR, a new kind of plant. This initiative has been under close observation worldwide because of its safety innovations, with double barriers containing radioactive materials during a serious accident, and even protecting against fusion reactions within the core, with additional safety and reactor control devices that can operate if standard controls fail.

With the OL3 project initially ahead of these developments, Heikinheimo notes: ‘The design’s maturity was the first question, then others arose over financing that affected the timetable too.’ There were a range of re-designs, which needed to be approved by STUK. After the construction licence was given, quality issues appeared in areas such as concrete (mixing and pouring), welding, piping and automation systems, causing further delays, adds Virolainen.

‘Delays led to more delays, such as equipment that had been delivered and installed early in the project needed servicing, maintenance then re-testing prior to final use,’ explains Virolainen.

Finally, 12 years behind schedule, fuel rods from Areva's Lingen facility in Germany were loaded into OL3’s core on 26 March 2021, leading to the start-up that began last December.

OL3 in winter, when it is expected that the station will prove its worth
Photo: TVO

Minor modifications
One bonus of this careful safety work, say both Heikinheimo and Virolainen, was that only minor modifications and approvals had to be made in the aftermath of the Fukushima tsunami and earthquake disaster in 2011. OL3 was already able to withstand earthquakes and explosions, collision with ‘a large commercial aircraft’ and missiles, plus extreme weather, they report. They also stress that seismological data indicates that the likelihood of an earthquake in the Baltic region is estimated at one in 100,000 years.

As for costs, the original agreement set a fixed price of €3.2bn. No final cost has yet been revealed, with accounting complexities impeding the agreement of a figure, says Heikinheimo. Areva has said the cost may be €8.5bn. The Areva-Siemens consortium agreed in 2018 to pay compensation of €450mn to TVO to take account of the delays.

There are now no complaints from Finland’s main industries, which are hungry for energy – pulp, paper and steel mills engineering and manufacturing, combined with heavy residential demand in freezing winters.

In 2020 (the most recent detailed figures released by Statistics Finland), Finland produced 66.6 TWh of electricity. Total consumption decreased 0.5 TWh due to COVID-19 restrictions and a warm summer to 81.6 TWh, meaning that 82% was supplied by domestic production.

Nonetheless, 18% of power was still imported – mainly from Sweden, but Russia and Estonia too, even if that was 25% less than electricity imported in 2019.

‘There have been no policy changes due to the Ukrainian war. OL3 is planned and built to withstand many natural and manmade eventualities,’ states Heikinheimo. Also, new projects using renewable fuels (especially biogas) and wind power will improve Finland’s energy autonomy. Wind power is currently the fastest growing sector in Finnish power generation, up 32% last year and providing near 8 GWh, claiming 12% of domestic electricity output, according to Statistics Finland.

Nuclear supplied 34% of electricity production in 2020 – a figure that will grow exponentially in 2023 when OL3 achieves full capacity and rise to (at least) 44%, with the Loviisa plants upgrading to extend its two 507MW pressurised water reactors (PWRs) until 2050.

No future with Rosatom?
Nuclear may become still more important in Finland if a planned new plant at Hanhikivi, in the far north on the Gulf of Bothnia coast, comes to fruition. Work is ongoing to prepare the site for construction, but for how long?

Russia’s Rosatom has a 34% stake in this project and is the main supplier.

Obviously, strategic concerns may come to bear – and indeed have. According to recent reports, the contract with Rosatom has been torn up and the project is unlikely to go ahead, at least with Russian involvement.