Up in smoke – could subsidies for BECCS increase emissions?

Burning forest biomass instead of fossil fuels and capturing some of the carbon emitted seems to be a win-win situation. Not necessarily, writes Professor Michael Norton from the European Academies Science Advisory Council (EASAC), who argues that uncertainties around carbon capture plant performance and, particularly, varying carbon payback periods mean that nothing is certain.

Currently, forest biomass in the form of imported wood pellets is a major source of renewable electricity in Europe and receives substantial subsidies and exemptions under carbon pricing schemes. Despite evidence that current utilisation of bioenergy is doing little to reduce atmospheric levels of CO2 in the short term, proposals are already being floated to add bioenergy with carbon capture and storage (BECCS) to remove CO2 from the atmosphere.

Can this help achieve effective mitigation of climate change in the move towards net zero by 2050 or limit climate warming to 1.5°C in line with the Paris Agreement?

In our recent report, Forest bioenergy update: BECCS and its role in integrated assessment models, we review evidence that current business models which point to BECCS as a ‘preferred negative emissions technology’ to deliver climate targets, may contain critical weaknesses.

One key factor is that many models that envisage large deployment of BECCS in the future ignore the fact that different feedstocks have different carbon payback periods, mistakenly considering that all bioenergy is carbon neutral. However, there are significant differences in the climate impact of bioenergy depending on its origin. To limit global warming and climate change it is unreasonable to consider burning trees as a form of renewable energy on the basis that new trees will grow to replace those that have been harvested. There is simply not enough time, given current net zero targets.

Renewable energy subsidies for bioenergy, together with outdated reporting rules for bioenergy, are changing the traditional markets for forest biomass (ie wood) in ways that can actually accelerate global warming.

Traditionally, high quality wood is used for long-life products such as construction timber and furniture, followed by re-use or recycling of poorer quality wood for paper and board. From a decade or so ago, wood burning for bioenergy became a new business that has access to renewable energy subsidies, leading to a rapid expansion in harvesting forests to make wood pellets, shipping them internationally at a scale of tens of millions of tonnes and then burning them to produce electricity.

Moreover, there are plans to extend the new business model to include BECCS by adding CCS to the current bioenergy model. This route offers opportunities for energy businesses to seek major public subsidies. Over €10bn are already provided annually in bioenergy subsidies in the UK/European Union (EU) and more would be needed for BECCS.

EASAC has been investigating whether this makes sense from a climate perspective, by reviewing the published literature and producing independent summaries for policymakers.

The bioenergy business model – especially where coal is replaced by biomass pellets – permits the power plant (and the country in which it resides) to avoid declaring the carbon emissions that come out of the stack. So that the emissions savings resulting from no longer burning coal count towards that country’s commitment to the Paris Agreement.

European power stations such as the UK’s Drax import the bulk of their biomass pellets and, by international agreement, when trees are harvested their carbon content is recorded in the forestry statistics of the country in which they grew. This approach favours the power business and host country.

However, due to the higher emissions per kWh generated from biomass combustion and supply chain emissions, it is inevitable that more CO2 enters the atmosphere when wood is burned in a power plant than when using coal. So, the levels of carbon in the atmosphere actually increase until new growth from the harvested forests can offset and overtake that increase.

The time delay while the new trees are growing and during which atmospheric carbon levels are increased is known as the ‘carbon payback period’. For forest bioenergy, this period is typically many decades, which creates an increased risk of overshooting the 1.5oC limit under the Paris Agreement.

Indeed, time is of the essence when it comes to forest bioenergy.

Bioenergy produced from agricultural, food and municipal wastes (with typical carbon payback periods of less than two to three years) may offer a good replacement for fossil fuels, and local sources of forestry wastes can also help.

But unfortunately, the available supplies of biomass feedstocks with short carbon payback periods are small in comparison with those that can be obtained by harvesting additional forest. Which is why stemwood from forest harvesting remains a major source of wood pellets and, with it, long payback periods.

This is an important point when it comes to looking at future energy scenarios that are derived from integrated assessment models (IAMs), that in turn inform the development of climate and energy policies such as the EU ‘Clean Planet for All’ and ‘Fit for 55’ packages in the context of the European Green Deal.

Researchers have found that many current IAMs do not take carbon payback periods into account. This has been justified on the grounds that the IAMs are designed to reflect current climate and energy policies, where sustainability criteria do not yet limit feedstocks to those with low carbon payback periods. However, it is self-evident that to model time-sensitive carbon emission targets, such as net zero by 2050, without addressing the long carbon payback periods of forest bioenergy carries a high risk of producing misleading results.

Businesses are already developing proposals for major BECCS projects, while the debate over subsidies for industrial-scale bioenergy is still underway. The simple concept for BECCS is shown on the left of Fig 1 in which CO2 is absorbed from the atmosphere by photosynthesis and the resulting biomass is burned for energy. Then the CO2 released on combustion is captured from the stack gases, transported and stored in the ground.

In other words, it is a ‘negative emission technology’ for CO2 removal from the atmosphere. But the reality is far from simple – see the right-hand side of the diagram. Leakages of CO2 occur along the biomass supply chain, forest harvesting may lose carbon stocks, and more biomass has to be burnt to power the CCS stages, because of process inefficiencies. The net result reported from demonstration projects is that more CO2 can leak into the atmosphere than is captured if the process is not very carefully designed. 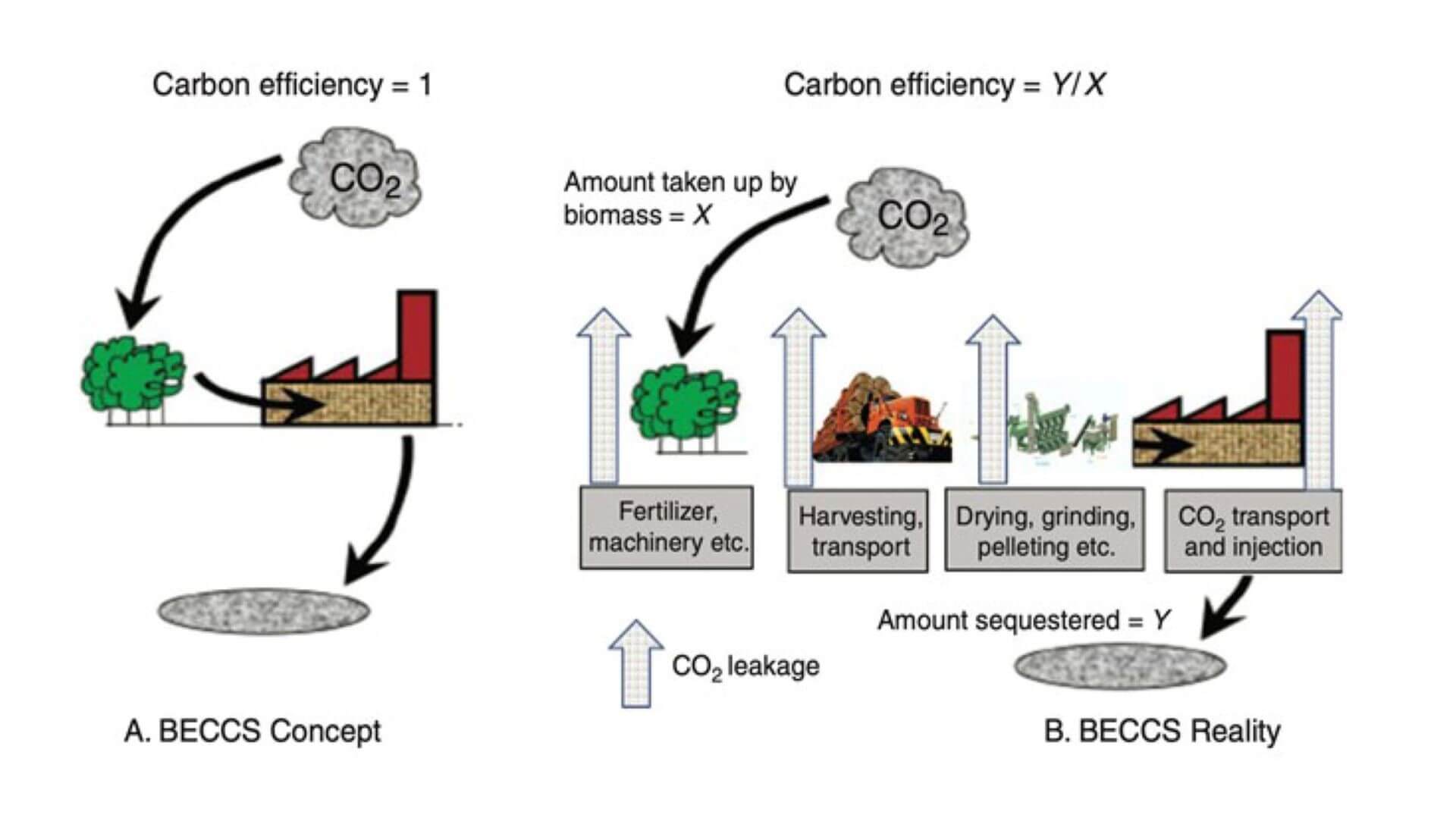 Despite these uncertainties, future scenarios used by the UK, EU and the Intergovernmental Panel on Climate Change (IPCC) assume that BECCS will deliver large removals of CO2 from the atmosphere by 2050 and beyond. However, we (and other authors) have found that key assumptions in at least some IAMs can lead to a bias in favour of BECCS as a future CO2 removal system.

It is very important to use realistic assumptions for the following:

Policy makers should thus be wary of claims that BECCS could remove gigatonnes of CO2 from the atmosphere by 2050. Because biomass feedstocks with short carbon payback periods, such as agricultural, food or municipal wastes, are limited and BECCS supplied with forest biomass can only remove carbon from the atmosphere slowly – over decades – as new trees grow to replace those that were harvested.

BECCS using forest biomass will, therefore, be unable to meet the urgent need to keep global warming below 1.5oC. It could at best offer only a long-term option for removing carbon from the atmosphere but will still need carefully monitored performance data and verified carbon payback periods for the feedstocks used.

We recommend that science-based due diligence should be conducted before more billions of public monies are allocated to subsidies for bioenergy and eventually to BECCS. The key question should not be ‘How do we exploit the carbon accounting system?’, but ‘What added value does public investment produce in terms of mitigating or reversing climate change?’

Coppicing, for example, can produce woody biomass with short carbon payback periods but its effects on biodiversity should be evaluated. Similarly, dead wood and forest wastes are potentially useful feedstocks for bioenergy. However, to remove them from a forest not only reduces biodiversity but also typically reduces carbon levels in the soil and therefore the forest carbon sink.

An excuse for inaction?

Carbon emissions must be reduced in the short-term to limit global warming. Concerns are growing that the attention of policy makers is being drawn towards the long-term potential of BECCS, instead of the more urgent investments in short-term mitigation options that are needed to prevent global temperatures from overshooting the 1.5oC limit.

To reduce the risk of policy confusion, we recommend that parallel monitoring and verification systems together with separate national and international targets should be put in place for both carbon emission reductions and carbon removals from the atmosphere. Within that framework, there is a role for local highly efficient BECCS projects to be trialled with wastes or other feedstocks with short payback times. But we should look at such cautious progress very carefully first before leaping to add even more billions in subsidies to large power plants burning forest biomass.