Info!
The EI library in London is temporarily closed (re-opening on 1st June at the earliest), as a precautionary measure in light of the ongoing COVID-19 situation. The Knowledge Service will still be answering email queries via info@energyinst.org, and is available for live chats on this page during working hours (09:15-17:00 GMT). Our e-library is always open for members here: https://knowledge.energyinst.org/services/elibrary, for full-text access to over 200 e-books and millions of articles. We are sorry for any inconvenience.

The number of petrol stations in the UK reached its peak in 1967 with a total of 39,958 and has been steadily declining ever since despite an increase in the number of vehicles registered in the UK. By the end of 2018, the number of stations had dropped to approximately 21% of the 1967 total, leaving 8,396 retail outlets open. The decline has been caused mainly by fierce competition, relatively tight retail margins and enlargement of forecourts and increase in the number of pumps per petrol station.
Petrol stations in the UK are branded with major oil company logos, independents or supermarkets. Many branded sites are in fact owned or operated by independent dealers. The market leaders last year were BP with 1231 outlets followed by Esso, Shell, Texaco and Gulf. The largest supermarket brand Tesco, with 505 sites, is followed by Morrisons, Sainsbury's and Asda. Supermarkets continue to hold the leading market share of nearly 46% of total UK fuel sales, followed by dealer sites (38%) and company sites (16%).
The future business models of petrol stations will be impacted by needs to develop alternative revenue streams to fuel due to demand for alterative energy. Additionally changes in operation will be influenced by the increased use of electric and hybrid vehicles. The Automated and Electric Vehicles Bill introduced in the Queen's speech in October 2017 makes it mandatory for motorway services and large fuel forecourts to install EV charge points to add to a current network of 19,909 charging points around the country (as of 2019).
Source: Energy Institute Retail Marketing Survey; RAC Foundation's UK Fuel Market Review, Zap-Map 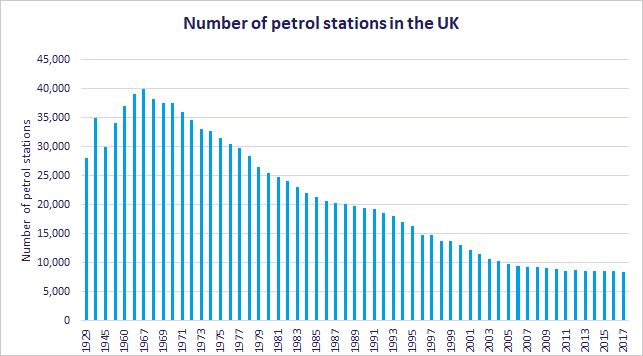 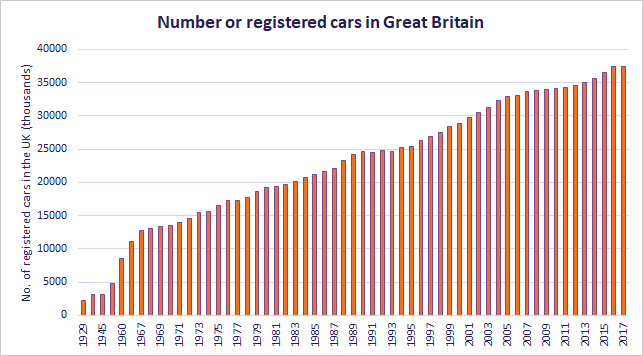